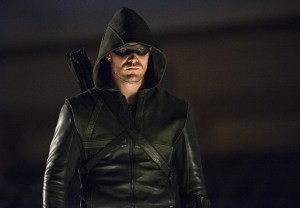 Arrow kicked off Season 3 on Wednesday night in the way it usually concludes: with a major death. After sweet heart-to-hearts with Oliver and Laurel, Sara was shot with three arrows by an unseen figure.

Meanwhile, Oliver and Felicity went on their first date, which was cut short by an explosion. As a result, Oliver concluded that a normal life was not for him — maybe not ever — as Felicity begged him not to dangle “maybes” in front of her.

“Don’t ask me to say, ‘I don’t love you,'” Oliver replied, planting a kiss on her. Still, Felicity — displaying some seriously impressive willpower — walked away.

Below, executive producer Marc Guggenheim previews the “gut-wrenching” aftereffects of Sara’s demise and the “emotional” road still ahead for Oliver and Felicity. He also weighs in on Ray Palmer’s mysterious agenda and Diggle’s status on Team Arrow. 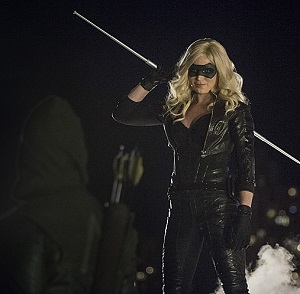 BYE BYE BIRDIE | Saying goodbye to Sara was “incredibly hard,” especially since actress Caity Lotz “completely fit into [the show’s offscreen] family,” Guggenheim says. But the pain of the brutal plot twist was worth it because “the story implications for this development are so far-reaching for the show and affect all of the characters.” For starters, it launches the mystery of “Who killed Sara?” which “will drive us for at least the first half of the year,” the EP previews. “It will set Laurel on a trajectory that she’s never had before on the show. It will create all these other complications and dynamics that I can’t talk about because it would spoil stuff. It buys us a lot of story, and it speaks to all the things that we wanted to do this year in terms of Laurel’s character, in terms of Oliver’s character, in terms of Felicity’s character.”

Not to mention, the crime-fighter’s fall leads into the CW series’ “most emotionally gut-wrenching episode” next Wednesday, simply titled “Sara,” which Guggenheim hints has a double meaning. Unlike with the show’s past deaths, which have been followed by time jumps, the hour delves into the immediate aftermath of the loss.

Given the subject matter, it’s no surprise that Guggenheim describes the installment as “a hard episode to watch” that will likely have crying-prone viewers in tears. “I have to say, I think it’s one of our best episodes,” the EP raves. “I’m really, really happy with it, because everything is laid bare, and it’s all out there. Everyone’s raw and naked. It was a really hard episode for the cast to shoot, particularly Emily [Bett Rickards], Stephen [Amell] and Katie [Cassidy]. And Caity Lotz, who basically has to lie on a slab and not breathe and actually does a very, very compelling 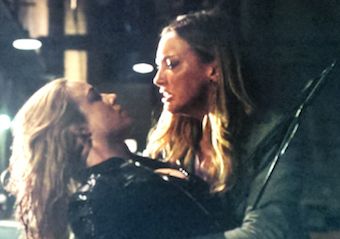 And it will not be the last viewers see of Lotz, who will appear in an episode beyond next week’s. “One of the beautiful parts of the show is, we do flashbacks,” Guggenheim points out. “We still want to tell the story of what happened when Sara washed up on the shores of Lian Yu, after the events of [Episode] 223, the sinking of The Amazo, and how she met Nyssa and how she joined the League of Assassins. There’s still a lot of story left to be told with Sara.” 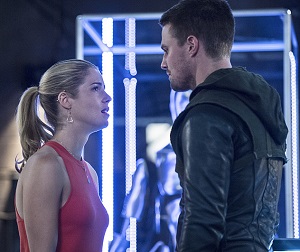 BROKEN HEARTS | Although it may seem like Oliver and Felicity’s nascent romance came to a halt before it even got started, Guggenheim assures that the show will continue to explore the pairing. “The end of that hospital scene didn’t just take Oliver and Felicity and put them back in a box,” he says. “The repercussions of that scene and that storyline in Episode 1, that’s going to follow them over the course of Season 3. It’s not over. We didn’t just hit pause or reset on their relationship. This is just a development in an ongoing relationship.” To that end, the duo will share “a very emotional scene” in next week’s outing. “This is not the last time we’ll hear the words, ‘I love you,’ in connection with Oliver and Felicity,” Guggenheim hints. As for that hallway “break-up” moment, “they’re both conflicted” about calling it quits, Guggenheim argues. “Our goal in writing that scene was to make it even-handed in terms of who’s ending it… If [viewers are] interested in what that scene in Episode 1 meant, I think there’s a scene in Episode 2 that clarifies it a good deal more.”

RAY PALMER: FRIEND OR FOE? | The soon-to-be new head of Queen Consolidated is a bit of a question mark, seeing as how those in charge of the company “aren’t always the best people,” Guggenheim teases. “So Ray represents either an interesting departure or interesting twist.” Season 2’s Slade Wilson arc “was a much more upfront story about vengeance,” so the producers sought to “reintroduce the concept of mystery to the show” with Brandon Routh’s character. “What Ray is planning and up to, with his whole Star City campaign and what he plans to do with the company, will be one of those mysteries,” the EP reveals.

DADDY DAYCARE | Diggle’s proclamation that his newborn daughter has changed everything “did mean he’s off the team,” Guggenheim confirms. “But in Episode 2, let’s say the circumstances of Sara’s death change up a lot of things for all of our characters.”

Arrow fans, what did you think of “The Calm?” Were you shocked by Sara’s death? Were you satisfied by the “Olicity” turn? Hit the comments with your thoughts, and grade the season opener via the poll below!