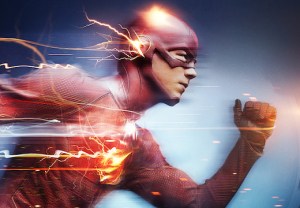 With time travel, “meta humans” and knowing nods galore, The CW’s Arrow spin-off The Flash “is the most comic book show, I think, that’s ever been made,” DC Comics’ Chief Creative Officer Geoff Johns declares.

The new CW drama (premiering Tuesday at 8/7c) “embraces the superhero lore just fully on,” Johns continues. “There are references to Grodd, and that’s not just a reference. There’s plans for all sorts of crazy stuff.”

Even though The Flash stands proud of its rich source material, Barry Allen’s boyish exuberance welcomes all, and the show is designed to be accessible to non-Arrow viewers and non-comic book aficionados.

BARRY ALLEN HAS THREE FATHERS | After his biological father (played by the original Flash, John Wesley Shipp) was arrested for the murder of his mother, Barry was raised by Detective Joe West (Law & Order‘s Jesse L. Martin). And now, another man, Dr. Harrison Wells, is mentoring Barry as he adjusts to the superpowered life. “One of the touchstones that we always talk about is Searching for Bobby Fischer, which is a movie we all love,” Kreisberg shares. “One father represents the heart, one represents the mind and one represents the soul. A lot of the early episodes and even the some of the ones we’re working on now are about Barry being faced with these choices [among his fathers] and having to help his fathers deal with each other.”

TIME TRAVEL WILL PLAY A ROLE | “It’s an important part of Flash mythology, so it has to be in there somewhere,” Johns reveals. Adds Berlanti: “It’s an active part of the first few episodes.”

NOT ALL META HUMANS ARE BAD | Just as the particle accelerator explosion transformed Barry into a hero, it will do the same with some of the others – AKA the meta humans – who were changed. “We’re really cognizant about not having too many people affected by the particle accelerator just being villains,” Berlanti says. “Sometimes, it’s that. Sometimes, it’s someone who’s good. In the case of [Captain] Cold [played by Prison Break‘s Wentworth Miller], it’s a someone who’s not affected at all.”

BARRY DOES NOT HAVE KILLER INSTINCTS | Taking a page from Arrow, who made a point not to take lives last season, “it’s important to Barry” to do the same when fighting baddie meta humans, Gustin says. “He doesn’t want to hurt anybody.” In dealing with that struggle, “what they’re going to end up doing with the meta humans becomes a very big part of Episode 3 and how they’re going to move forward. That becomes one of the biggest elements of the show,” Kreisberg previews, while star Tom Cavanagh describes the plot as “an incredible part of the show, a tremendous storyline and very cool-looking, too.”

GUSTIN IS TURNING INTO BARRY ALLEN | “I feel like every day, it’s hard to tell a difference between me and Barry, because I’m Barry more often now than I’m Grant,” the actor says, earning a playful “Thank God!” from his co-star Cavanagh. “And I carry him with me a lot when I leave. I think about it all the time. I really do. I’m just thinking about the script and the character all the time now… I was talking to Andrew about it recently when he was in town, and just how I’m bummed out sometimes that it feels like everything feels heavy and [Barry’s] weighed down right now. I’m feeling that way now!”

IT’S FRIENDLY TO NEWBIES | “Although it is a spin-off, you don’t need to have watched a minute of Arrow to enjoy The Flash pilot,” Kreisberg promises. But if you do watch both CW series, you’re in for a treat when the two shows cross over later this season. “It’s not just the gimmick. It’s also advancing the storylines that we’ve been telling and [seeing] your characters really grow,” Kreisberg previews. “When you look at both of these crossovers, these aren’t just about the crossovers of the cast. They really are very important episodes for what Barry’s going through, for what Oliver’s growing through.”