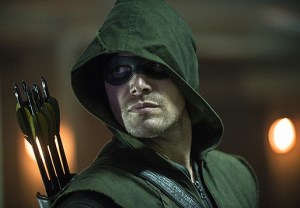 The CW’s Arrow pierces its enemies when it returns for Season 3 Wednesday at 8/7c. TVLine just screened the pivotal hour, and we’re sharing some observations, as well as scoop from executive producer Marc Guggenheim about Oliver and Felicity’s big [SPOILER], Ray Palmer’s unexpected entrance, the surprise Laurel has for someone and more.

* It is quite possible that we have never seen Oliver smile so much during an episode.

* Roy is a part of Team Arrow in a big way, and the group will continue to evolve in the premiere. Also: Fancy new arrows!

* Brandon Routh makes his entrance not at Queen Consolidated, but at a location that may make you think of his previous gig, Chuck. Also, his interaction with Felicity? It doesn’t go as expected.

* Some things to know about Oliver and Felicity’s “explosive” first date: Ollie pulls a reverse Superman with his outfit; both parties are more than a little nervous; Oliver recounts the day he met Felicity (including an incredibly small detail about that encounter). * If you were worried that “Olicity’s” hospital lip-lock would get interrupted by any number of emergencies, fret not. “I’m very happy with the circumstances under which they have their first kiss,” Guggenheim teases. “I hope it plays as unexpected. I hope it plays as emotional.”

* Laurel has a nice surprise for Oliver that brings yet another smile to his face. (Seriously, so much smiling in this episode!)

* Diggle’s impending fatherhood has him “terrified.”

* Sara makes a memorable re-entrance into Starling City, meeting up with both Oliver and her sister Laurel.

* Now’s a good time to jump on board the CW drama, if you for some reason have yet to do so. “We closed a chapter at the end of Season 2, and this is a brand-new opening,” Guggenheim says. “It’s pretty new viewer-friendly.”