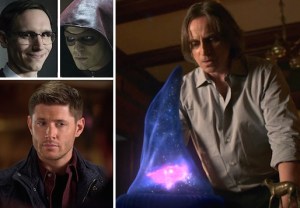 Will a magical hat put a lid on a Once Upon a Time romance? Who is Supernatural‘s supervillain? What is in Arrow‘s arsenal? How will The Fosters celebrate Christmas? Read on for answers to those questions plus teases from other shows.

Do you have any scoop on Once Upon a Time‘s Belle? The appearance of what appears to be The Sorcerer’s Hat from Fantasia has some worried that Rumplestiltskin may again keep secrets from her. –Natalie
Those “some” would be wise to worry. “Rumple certainly seemed to recognize the hat when he saw it. And he certainly seemed to think it was quite important,” cocreator Adam Horowitz teases. “What it is, and why he desires it become important to the story in the near future.” Now, if it cleans your palate any, Robert Carlyle promises that the Belle-centric Episode 6 should be a huge fan-pleaser: “Anyone that loves that [Rumbelle] relationship will really enjoy those scenes.”

While I love Once Upon a Time‘s Hook/Emma, do you have any scoop on what’s in-store for our favorite pirate this season outside of romance? I hear he has some conflict with the Knave. –Stef
You heard right. As Michael Socha says of his onetime Merry Man, “He’s a thief and a drunk, so he pisses a few people off” upon arriving in Storybrooke. “He gets locked up. He gets put in jail. He’s naughty. He’s always up to something.” As for the Knave/Hook dynamic, Colin O’Donoghue simply says: “It’s complicated. And I’m going to leave it at that.”

RELATED Once Upon a Time: Jennifer Morrison Talks Bonding With Elsa, Dealing With Regina, Adventures in Dating Hook and More

Have you any information on The Fosters‘ Christmas episode? –Tricia
You-know-what has come early for you, Tricia! I can tell you that as Callie and Jude spend their first Christmas with the Fosters, Stef feels that Grandma Sharon is a bit excessive with her gift giving — especially when she learns where the money is coming from. Meanwhile, Lena must face her bias against a family member.

Should Elementary fans be worried about its late start, on Oct. 30? Does this mean the season won’t be as long? –Craig
Worry not — I am hearing that this season has not in any way been slashed, and will run “at least 20” episodes, maybe more.

Who will be the Big Bad of Supernatural Season 10? –Tom
Would you believe it’s… Sam and Dean? As the Winchesters battle their inner demons — literal and figurative — the show “be introducing, over the course of the season, characters that are very, very, very personal to our main characters,” executive producer Jeremy Carver previews, “and that’s all going to start to snowball into, ‘You are who you are,’ and having to deal with all this and drawing some lines. Of course, there’ll be Bigger Bads that emerge, but the central focus of the season is really on these personal arcs.” BONUS SCOOP: Carver reveals, “You will most definitely see Charlie’s (played by Felicia Day) return from Oz.”

Any Arrow scoop that is Roy Harper-related? –Andrew
Showrunner Marc Guggenheim says that Roy is more a member of Team Arrow than ever, and not just because he’s got a mod new Arsenal outfit. “He’s really present and a member of this group, so the trio becomes a quartet,” Guggenheim explains. “And that’s definitely true in Episode 6, [which] is a very Roy-centric episode. It speaks, in some ways, to Episode 212 [‘Tremors,’ in which Oliver trained his padawan]. I wouldn’t call it a sequel, but they’re thematically related.” All told, the EP says, “What you see in Season 3 is a much more mentor/mentee, master/apprentice relationship. You really see how Oliver is training this kid to be a hero in his own right.”

Any scoop on Arrow‘s Olicity? –Lindsay
The reason behind these angsty Episode 2 photos will be revealed much sooner than you think.

Please tell me you have some scoop on Chicago Fire? – Quanita
It looks like Casey could be bound for Chicago P.D. to hash out his issues with Voight. Executive producer Matt Olmstead tells us that a visit from the firefighter is being targeted for the back nine of this season. “It all started with Voight almost losing his mind, trying to convince Casey not to get his own son jammed up, and obviously [he] went too far, apologized for it, copped to it, but Casey’s never going to forgive that,” the EP says. “That day’s coming [where they cross paths]. I’m not quite sure what it’s going to be, but it’ll be powerful.”

What are the chances Severide’s sister Katie will come back to help her brother, and of course Otis, in the aftermath of that Chicago Fire finale? –Kathryn
When presented with your Q, EP Matt Olmstead said there are “no plans, but that’s a very good idea…. We’ll explore it in the back nine of the season.”

Any scoop on Gotham‘s Riddler? –Mason
Given he’s rather mild-mannered (if quirky) thus far, I asked Cory Michael Smith what might ultimately steer Edward Nigma toward his villainous destiny. “He is incredibly well-intentioned… but he’s a little misunderstood and mistreated. He’s certainly abused by Harvey Bullock,” the actor shared. “He’s a brilliant guy who doesn’t have much power but thinks he deserves it, so when he finally starts to taste it, he’ll want more.”

Do you have any Reign news you can divulge? –Cindy
In surveying Francis’ Season 2 journey, EP Laurie McCarthy told us he isn’t about to subject his own child to the life he had growing up under King Henry’s stern thumb. “Francis will have a chance to do it differently with his child by Lola, but it is going to pull him and Mary apart, among other things,” she said. “And they will, in fact, be drawn to others. But whether they’ll give into that temptation or not is anyone’s guess.”

I love Nashville and would like to see a Daphne-centered episode. This season’s been all about big sis, how about little sis? –Matt
If only because we share a name… I dug around and found out that in Episode 5, Daphne will start acting a little “entitled,” and then in Episode 6 she clashes with her big sis in a big way.

Any indication on the fate of USA’s Playing House? –Gemini
None yet, though its absence from this week’s renew/cancel announcements perhaps does not bode well. But if you’re missing Jessica St. Clair, know that she will guest-star on the new NBC comedy Marry Me as a nemesis for Casey Wilson’s Annie, playing a young, Pilates-obsessed mom who knows how to make Annie feel inferior. (Also due to drop by Marry Me is Stephen Guarino aka Happy Endings‘ dramaaaaa-tic Derrick, playing “one of Chicago’s most fabulous gay men.”)

I loved, loved, loved the Star Wars Rebels premiere! I was wondering if there was any word on if Rae Sloane from the prequel novel A New Dawn might pop up this season? –Ryan
Sorry, I am, mmm, but no amount of Jedi mind tricks could procure intel from Disney XD. Outside of Artoo, Threepio and Obi-Wan Kenobi (via hologram), they’re not letting slip with any other cameos from film or novel canon.

Any Shameless scoop? Particularly one involving Ian and/or Mickey? –Sam
Be careful what you wish for, Sam. As Season 5 unfolds, it looks like Ian is on meds for his bipolar disorder — and it’s affecting his libido. Mickey, as his “caretaker,” is treating him with kid gloves. But for how long?