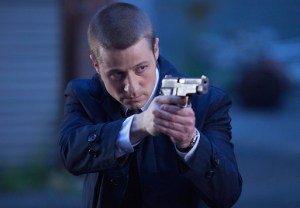 Namely, I am reminded of the experience many of us had sampling Agents of S.H.I.E.L.D. this time last year. Buzzy newcomer, based on comic books. Solid pilot. And then… searching. A show searching for its thing.

In the case of the ABC series, it was a significant wait — 16 episodes, until Captain America 2 disassembled S.H.I.E.L.D. and revived HYDRA — before the show was truly allowed to reveal what it was designed to be.

With Gotham, I wonder if the increasingly alluded-to Arkham plot will serve that same purpose.

Because again this week, it was more world building — entirely expected for a nascent, mythology-rich series. Jim Gordon further came to terms with how “sick” a city Gotham has become, that a man who cuffs the corrupt and perverse to weather balloons and releases them to an eventual death was barely a priority for the police, and in fact was championed by many. As Jim notes to fiancee Barbara (who, yes, has a romantic past with the MCU’s Montoya), “When people lose hope, that’s when you get vigilantes.” The Balloon Man himself underscored Jim’s latest epiphanies, explaining how the mayor’s plan to shuttle the street kids to a dreaded upstate facility was the last straw for him, that when it came to picking a target for his final balloon, “It didn’t matter,” the city is so dense with the despicable.

Elsewhere, we saw more plotting on Fish Mooney’s part — always planting misleading bugs in people’s ears, keeping Falcone just this side of being a frenemy, scorching the Earth that Boy Scout Jim Gordon walks on. Meanwhile, Penguin set foot back in Gotham City and kept killing willy-nilly, be it to keep secret his “resurrection” or just get a pair of new shoes. Even at a new job washing dishes, he finds himself within earshot of rival mobster Salvatore Maroni (Dexter‘s David Zayas). Always listening and observing, believing, “Gotham needs me! I am its future!” But as of right now, Oswald is… in Jim’s foyer, greeting the man who was sent to kill but instead yet saved him: “Hello, James, old friend.”

We had a smidgen of movement on the Wayne murders front, as Selina demonstrated to Jim that she was a witness to the tragedy — only to give the cop the slip afterward. But for those who came for the “Batman” in “Batman prequel series,” there were a pair of in arguably interesting moments — first, as young Master Bruce impressively parried with Alfred, in what apparently was his latest fencing tutorial. And then toward hour’s end, as Bruce was enrapt with a news broadcast about the Balloon Man’s capture. If vigilantes are not to be tolerated, the newswoman mused, “Who will defend the people of Gotham?”

Something for the lad to chew on over the next decade or so.

What did you think of Gotham Episode 3? Do you sense the Arkham plot — whatever it is that Falcone and/or Maroni have in store for the shuttered prison — is the narrative engine we’re waiting for?