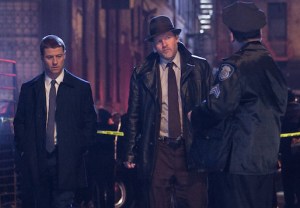 Fox premiered its super-buzzy new Gotham drama this Monday night — it is the hero series that TV deserves, or the one it needs right now?

The pilot opens with a young Selina Kyle laying witness to the alleyway murder of Thomas and Martha Wayne, right in front of their bereft son Bruce. (See how their sprawled bodies formed bat wings?) We then cut to the Gotham City PD, where grizzled detective Harvey Bullock’s new partner, war hero Jim Gordon, subdues a gun-waving perp. Harvey and Jim get called to the double-murder scene, where the former quickly tries to “lose” the case, given its high-profile vics and scrutiny that will thus follow. Alas, Jim is already talking to witness Bruce, assuring the lad, “How dark as the world may be right now, there will be light.”

Jim even promises Bruce and family servant Alfred Pennyworth, “I will find the man who did this” — to which world-wise Alfred must smirk, “New boy, are ya?”

Over coffee at a diner, Harvey loops Jim in on the importance of this case, and how they should pass it off to Major Crimes. But when MC detectives Montoya and Allen come soliciting the “press action” (and suggesting Harvey do the right thing “for once”), Bullock rebuffs their bid: “You had to go and be disrespectful.”

PHOTOS Welcome to Gotham: Your Guide to the Good, the Bad and the Batty

After he fails to get Captain Essen to change his partner (or get “soldier boy” to request a transfer) — and following a brief intro to riddling CSI Edward Nygma (“What’s nowhere but everywhere, except where something is?”), Harvey and Jim pay a visit to crime queen Fish Mooney.  There, we see henchman Oswald “Don’t call me Penguin!” Cobblepot get a taste for brutality, beating on a colleague.

Things briefly screech to a halt, as we get a domestic scene between Jim and his fiancée Barbara, in her swanky digs. Next morning, Harvey rings Jim with a lead: Mario Pepper (aka She Who Will Be Poison Ivy’s father), a low-level thug rumored to be pawning Martha Wayne’s necklace. Mario makes a run for it, a chase ensues, with Harvey ultimately putting a bullet in the baddie. Although Jim and Harvey are lauded as heroes, Oswald snitches to Major Crimes that Fish framed Mario — suggesting that Carmine Falcone’s organization had the Waynes killed. Montoya relays that info to Barbara, who apparently is/was a very close gal pal. “Does [James] know you… like I know you?” the lady detective asks.

Jim relays the frame-job allegation to Harvey, noting that Pepper didn’t own shiny shoes such as the killer wore. Harvey waves off the trouble, leading Jim to visit Fish by himself. “You have a little danger in your eye,” Fish notes as Jim threatens to get to the bottom of things. She then has her thugs grab him, eventually hanging him up for slaughter inside a meat locker. Harvey makes a bid to save his partner, only to wind up joining him upside-down. But before Fish’s goons can do their dirty work, Falcone shows up to call off the “impetuous” cop-killing.

Speaking privately with Jim — reflecting some on Jim’s father’s legacy as a D.A. — Falcone claims that Pepper was framed not to conceal the true killer but to swiftly give the city the peace of mind it needed. Later, Harvey enlists Jim to prove himself and thus get him out of Falcone’s crosshairs — by offing Oswald, the snitch. Jim takes Oswald to the end of a pier, growls in his ear to never return to Gotham, and then fakes the kill shot, as Oswald plunges into the river.

At episode’s end, Jim shows up at Wayne Manor offering to turn in his badge, knowing that the real killer is still out there, or be allowed time to find the culprit. Alfred is skeptical, but Bruce interrupts him, handing Jim his badge back. Then, we see Oswald resurface in the river, clamber ashore and maul an innocent fisherman, as he eyes/covets the Gotham skyline….