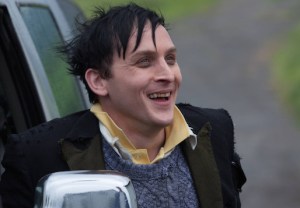 As the premiere of Fox’s Gotham drew to a close, it was sink or swim for Oswald Cobblepot aka The Penguin, after do-right Detective Jim Gordon faked killing Fish Mooney’s snitch and instead shoved him into the river, with orders to never darken the city’s streets again.

Yet something in the way Oswald eyed the city skyline upon later resurfacing from the water (and killing a kindly fisherman, to boot) tells us that Gotham has not seen the last of this natty, nasty bird.

Taking us inside Oswald’s mind during that closing moment, actor Robin Lord Taylor tells TVLine, “He’s thinking that he’s never going to be powerless again, and that he won’t let anyone stand in his way” — a credo made clear in this week’s episode (airing Monday at 8/7c), as Oswald takes his first steps in Gotham City’s general direction, suffering no fools (and certainly none that dare call him the P-word) along the way.

“He’s immediately learning how to play people off of other people,” Taylor says of his ambitious alter ego’s journey. “His fearlessness in terms of achieving what he wants — which is to run Gotham City — and the lengths to which he goes will surprise people.”

Of course, Oswald would not have lived to see another day had Jim Gordon not spared his life, setting the stage for what Taylor says is his favorite relationship on the series. “Penguin is completely indebted to him. However at the same time, they’re rivals,” the actor notes. “Their ultimate goals, good and evil, are disparate, but at the same time they need each other. It’s an incredible dynamic that you rarely get to play with someone, and Ben [McKenzie] is such a fantastic actor to share this experience with.”

Gotham viewers will begin to witness the most important relationship in Oswald’s life, meanwhile, when Carol Kane (The Princess Bride) this week debuts as his old-world mother, Gertrud Kapelput.

Taylor sums up the mother/son bond as “interesting,” then lets out a chuckle before elaborating. “Oswald’s mother is the only person he trusts in Gotham City, which is a good thing and a bad thing,” he points out. “For a person like Oswald, who is somewhat depraved, to trust and love anyone… there has to be something a little sadistic going on there.

Want more scoop on Gotham, or for any other show? Email insideline@tvline.com and your question may be answered via Matt’s Inside Line.
https://www.youtube.com/watch?v=bzUJDmjBPuQ