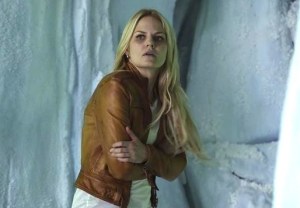 This week on ABC’s Once Upon a Time, Emma got a chilly reception from Storybrooke visitor Elsa, Regina froze out son Henry, the local ice cream slinger served up a frosty twist and in flashbacks Anna taught David some cool tricks.

RELATED Ratings: Once Upon a Time Premiere Hits a 2-Year High

IN THE FAIRYTALE LAND THAT WAS…. | Having arrived in the land also known as Mist Haven, Anna shows up on shepherd David’s doorstep, having gotten his name from Kristoff. Passing herself off as “Joan” and being quite cryptic about her business, Anna is asking to bunk at David’s when evil Bo Peep arrives to collect her “payment.” If David and his mom Ruth don’t pay up by tomorrow, she will seize their farm and employ them as slaves. Later, Anna encourages David to fight back, saying that she can teach him how to use a sword, using what she learned from the soldiers back in her kingdom. David’s bearish, but Anna explains how her sister needed a similar kind of push, upon realizing that “surviving isn’t living.” David takes some lessons, but “Joan” goes missing the day of their next lesson, captured by Bo Peep. David declines to pay up, and uses his newfound swordplay to fell Bo Peep’s guards, and then outwit the crone herself. Using her crook, David finds “branded” Joan. Ruth sends their friend off with a sandwich and the name of the wizard her parents may have been seeking: Rumplestilstkin, who looks on, all a-titter, via a crystal ball.

IN STORYBROOKE…. | Emma is consoling Henry, whom Regina has asked to stay away while she sorts through her stuff, when the town is hit by a blackout, caused by Elsa erecting an ice wall around Storybrooke. Emma and David go to investigate, while Grumpy, Granny and Happy charge Mary Margaret with restoring power, as leader of their kingdom (and with madame mayor incommunicado). After Hook arrives at the ice wall (for what he deems his and Emma’s “second date”), Emma sees someone behind the wall. As she goes to check it out, David tells Hook it’s time to discuss the pirate’s intentions toward his daughter. Hook contends that whatever he and Emma are is “up to her, as well as me.” Emma meanwhile has found Elsa, who says she is searching for her sister Anna. But when Hook and David approach, Elsa freaks out and erects an ice cave around her and Emma.Thing is, Elsa can exist just fine in such a meat locker, but Emma begins to freeze to death. Elsa feigns that she’ll take down the wall once her sister is found, but in reality, Emma deduces, Elsa isn’t able to control her powers.

After learning that Emma has passed out, Hook and David go to Mr. Gold’s shop, where upon seeing the ticket for Anna’s necklace, David realizes he knows her, as “Joan.” As such, they can use town butcher Bo Peep’s crook to find her. Hearing that heartwarming news, Elsa is able to plow an exit from the cave — yet for some reason is unable to take down the entire wall. Hmmm….

Elsewhere, overdue-for-breastfeeding baby Neal prompts Mary Margaret to find a(n improbable?) solution to the blackout. Back at the Charmings’, the crook doesn’t reveal Anna’s location but confirms she is in fact alive. Then upon hearing his grandfather’s pep talk about how they won’t give up on Anna, Henry seeks out Regina, bellowing at her door, “I’m not going to give up on you!” Regina lets her son in and they hug.

Things are less cozy, though, at the Any Given Sundae ice cream shoppe, where Leroy is served a cone by its beautiful proprietress (played by Lost‘s Elizabeth Mitchell), who somehow didn’t lose any inventory during the power outage. After Leroy exits, the woman with a wave of her hand turns liquid cream into frozen confection, and then frosts up the freezer as she leans back against it. Meet your Snow Queen!

NOTABLE QUOTABLES |“I love sandwiches!” (a nod to how Anna and Hans in a Frozen tune “finish each other’s sandwiches”?)…. “It didn’t talk about how to get over your boyfriend’s wife time-traveling from the past, but good enough?”….”I did not ask to maintain a metropolitan electrical grid!”…. “You have survived your entire life without light bulbs. Buy a flashlight!”…. “Aren’t you cold?”/”It never bothered me.”

What did you think about this week’s episode, “White Out”? Was Snow White playing with the power grid one of the silliest C-stories the show has ever bothered with? And did anyone else feel heat between Elsa and David? #Delsa