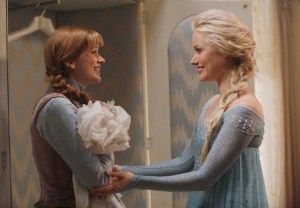 Unless you’ve been living under a rock troll, you know that ABC’s Once Upon a Time will lead off Season 4 (premiering Sunday at 8/7c) with its own spin on Frozen‘s Queen Elsa, Anna et al. But that’s just the tip of the storytelling iceberg, as creators Adam Horowitz and Eddy Kitsis shared with TVLine as part of our Fall Preview and during a chat at the show’s premiere party.

While some of the following has been doled out to you in bits and pieces over recent weeks, here is the (mostly) complete transcript of the highlights, for your last-minute, pre-premiere consumption.

TVLINE | When did you first start batting around the idea, “Maybe we should make a run at Frozen?” The movie came out in late November, right around when you wrapped Season 3A….
EDDY KITSIS | January…?
ADAM HOROWITZ | It was a process, and I’d say the process was this: That first weekend, right around Thanksgiving, I took my daughters to see Frozen, Eddy took his son, and we just loved the movie so much. We became obsessed with it. And there were a few “What if?” conversations that happened, but by the time we got to January it started to go beyond that into thinking, “Wait, we see a way to do this….”
KITSIS | It was writers room fan fiction – “Oh boy, if we had those two we could do this…!” Finally we had so many “We could do this” ideas, we thought: What happens if we ask? And they said yes.

TVLINE | Is it a lingering Season 3 plot thread or something new going on in Season 4 that these characters will help service?
KITSIS | Oh man, that’s a good question….
HOROWITZ | It’s a tricky question.

TVLINE | Or is it about bringing in new pot stirrers?
HOROWITZ | It’s a combination of a number of things. It’s a new pot stirrer and all that, but it’s also not so much about plot coming out of Season 3 but out of character coming out of Season 3. And by that I mean, what our characters went through — particularly Emma and Regina, and Mary Margaret and David, all of them. Where they found themselves at the end of the season is incredibly relevant to what the Frozen story is and what those characters bring to our show in Season 4.

RELATED Once Upon a Time: Dancin’, Romancin’ and 9 More Premiere Teasers

TVLINE | But weren’t most of the Storybrooke characters happy when last we tuned in?
KITSIS | Well, listen — most of them are happy, but that’s what the premiere is for. The premiere is to let you know, “This is what the new season is about.” We are gong to take the character growth from the last three seasons, and Anna and Elsa (played by Elizabeth Lail and Fringe‘s Georgina Haig) are going to incite new developments.
HOROWITZ | I’d also say that in addition to inciting things, there are things about Anna and Elsa that we discover are resonant within our own characters – issues and things they’ve dealt with over the course of three seasons — that make them feel like a really nice match. They can help the process of discovery and growth.

TVLINE | Is also a bit of someone else bringing their fight to our characters’ playground?
KITSIS | Sometimes when someone brings their troubles into our town, 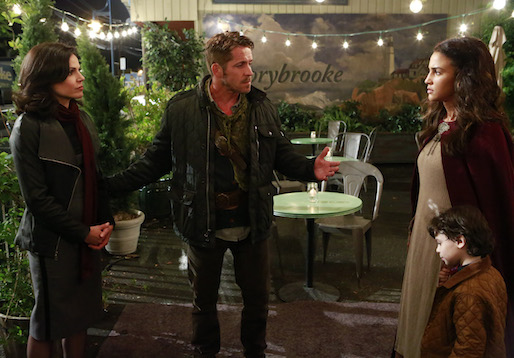 we find out that their troubles and ours might be the same thing.

TVLINE | What would you say is the overall theme for Season 4A?
KITSIS | “Never give up on the people you love.” To us, that was the main inspiration about Anna. We loved that she never gave up on Elsa, even though Elsa was willing to go off and live alone and let it go. Anna was like, “No, you’re my sister and I love you no matter what.”

TVLINE | Care to go on record ruling out any blood ties between any Frozen characters and the regular gang?
KITSIS | Yeah!
HOROWITZ | We will go on record as saying that we are not going to reveal that Elsa is, for example, [a Storybrooke character’s] sister, or that someone is her brother.
KITSIS | We really should just have a villain named, like, “Scott,” that has no relation to anyone – and then just watch the fans get bored and go, “Oh, now we get it.”

TVLINE | Could 4B have been 4A if Disney said, “No, too soon” to the Frozen mash-up?
HOROWITZ | We would have reconceived a lot of things, but were very fortunate that The Powers That Be at Disney said yes at a very early stage. We’ve had the benefit of planning this since February.
KITSIS | Or else we would have done something complete different.

TVLINE | You’re doing an 11-and-11 split season again?
KITSIS | Yes. Like last year, the first half will be Frozen and the second half will be revealed in the winter finale.
HOROWITZ | The working title is “The Coming of Scott.”
KITSIS | Scott, The Villain That Has No Relation to Anyone. He’s just an annoying jerk who cuts in front of you and never says “Excuse me,” he doesn’t tip at Granny’s…. No, the seeds [for Season 4B] are planted in the first 10, so that when you see [the reveal] in 11 you go, “Ah, OK.” TVLINE | The news of Kristen Bauer’s return as Maleficent — does that give away something about the back half of the season?
KITSIS | Well, you know, it might, or you can look at it as just a tease for the second half of the season.
HOROWITZ | Kristen Bauer is someone we loved since we used her in the first season. We had an idea [for her return] and if you hang around and watch you’ll see what it is. But yeah, she’s a fun character to play with.

TVLINE | We’ve seen lots of love triangles on TV, we’ve even seen characters come back from the dead to create a love triangle. How might Regina/Robin/Marian be different?
HOROWITZ | First, who says we’re doing a love triangle?
KITSIS | Exactly. It’s going to be messy and it’s going to be complicated, but we’re hoping it’s a hot mess.
HOROWITZ | We’re trying very hard to put our spin on these different kinds of relationships. Hopefully it becomes less about the relationship itself and more about Regina. What we saw at the end of the finale, with Marian returning, and how that might affect her feelings for Robin Hood, his feelings for her, his feelings for Marian, that will open a door to who Regina is and what she’s going to become.

TVLINE | OK, because she needs some good loving, and I don’t see her stepping aside politely!
KITSIS | We all need good loving, Matt.

TVLINE | But to be clear, Regina doesn’t remember killing Marian?
KITSIS | She was just another peasant. We saw her wipe a whole village out — she can’t remember everybody!

TVLINE | I read that there’s a Regina/Emma-centric episode on the horizon….
HOROWITZ | There’s an entire episode devoted to that dynamic coming up in the first batch of episodes, yes.

TVLINE | How are things now between the two of them, given how Season 3 ended?
KITSIS | “Complicated.” We definitely feel like we are paying attention to the three seasons leading up to this, in terms of where they were, where they’ve been and where they’re going. That that’s been a really rich area to dive in to, and we’re excited for the audience to see that.

TVLINE | What obstacles can you tease for Emma and Hook now that they are on the same page, after she learned of his magnanimous gesture to find her?
KITSIS | One of their biggest obstacles is Emma’s past history – in the sense that Emma is someone we know has a very hard time letting her guard down. Sometimes, obstacles can be internal as well as what’s put in front of you. It’s like Adam said, it’s less about who Regina and Emma are with and more about who they are as people, growing.
HOROWITZ | Also, when Hook discovers that she’s not Jewish, and he was raised Orthodox…. The whole thing is tricky.

TVLINE | We shouldn’t worry about Killian 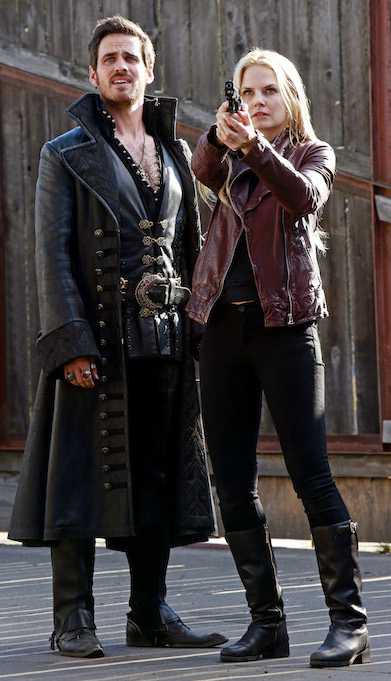 becoming too domesticated, should we?
HOROWITZ | No, we should not be worried about that. We are not about to see a domesticated pirate.

TVLINE | Will Emma keep living with the Charmings, or will she go apartment hunting?
KITSIS | She needs her own place, and we’d love for her to see it this year.
HOROWITZ | But on a sheriff’s salary, in Storybrooke…? But in all seriousness, the domestic situation of the Charmings, of Emma and Henry and of Regina, does fit into the early episodes. Now that they’re making Storybrooke their home, they’ve got to figure out things.

TVLINE | And what is going on with the Charmings and their new baby?
KITSIS | Right now they’re really happy. They have their child, they’re very excited…. I think that everybody starts out Season 4 ready to make Storybrooke their home, but as you know, as a parent, a baby can sometimes add stress in a relationship. It can also bring you together. And it can also make you react in certain ways. Also, we’re going to find out in the first batch of episodes that Mary Margaret will have much more responsibility than just her child.

TVLINE | We’re going to get a flashback to a pre-Rumplestiltskin Belle?
HOROWITZ | Absolutely. We are going to — for the first time, I believe, since the three minutes at the beginning of “Skin Deep” – see a backstory that involves Belle before she met Rumple. That’s in the first batch of episodes.

TVLINE | You’ve been rather mum on your plans for The Knave thus far. What can you give me?
HOROWITZ | His background as Will Scarlett, who was one of the Merry Men and a thief, comes into play very early.
KITSIS | And for those [Once Upon a Time in] Wonderland fans, we will be explaining why he’s in town and what happened [since the spin-off ended]. I can tease that he fits rather nicely into Storybrooke. His introduction is a really fun one.

Want more scoop on Once Upon a Time? Email insideline@tvline.com and your question may be answered via Matt’s Inside Line. (With reporting by Vlada Gelman)