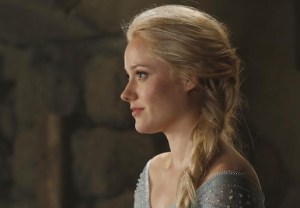 Go figure. Once Upon a Time‘s decision to incorporate the buzziest Disney characters in a great while paid off in the ratings on Sunday night, as the Season 4 premiere — drawing 10.2 million total viewers and a 3.7 demo rating (per finals), and earning a “B+” grade from TVLine readers — surged 20 and 42 percent versus last year’s opener.

RELATED Once Upon a Time Premiere Recap: Do You Want to Fight a Snowman?

RELATED Read Our Recaps for Resurrection and Revenge

FOX | The Simpsons (8.5 mil/3.9) rose 33 and 34 percent from its previous premiere. Brooklyn Nine-Nine christened its new time slot with 5.5 million viewers and a best-since-series premiere 2.6 rating, up from both its March finale (2.6 mil/1.3) and Bob’s Burgers year-ago performance in the time slot (4.5 mil/2.2). Family Guy‘s hour-long crossover with The Simpsons did 8.5 mil/4.5, surging 61 and 73 percent from its previous premiere, hitting a four-year demo high and topping all scripted fare in the demo.