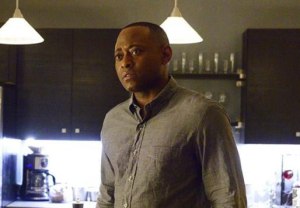 When we last saw Resurrection‘s Agent Bellamy, he had run into trouble on the outskirts of Arcadia.

At the start of Sunday’s Season 2 premiere, we find him in a very similar predicament. And even though Bellamy uncovers a number of unsettling answers throughout the hour, Sunday’s episode left behind even more troubling questions.

Before you tell us your thoughts on the episode, read on for the finer details of “Revelation”:

HEART TROUBLE | Bellamy wakes up, startled, at the edge of town where he fled with Jacob last season. All he can remember is Jacob being taken away by the authorities, before Bellamy was taken into police custody himself. But when he runs to Henry and Lucille’s house to deliver the bad news, Jacob is already home, safe and sound. (According to the authorities, Bellamy was “unstable” when he took off with Jacob, which becomes more and more plausible as the hour goes on.) Confused, Bellamy gives his colleague Toni a call, but he’s only able to reach a skeptical government worker who can’t seem to believe she’s speaking with Bellamy. (Hint hint!) When he begins experiencing heart pain, Bellamy heads to the hospital where Maggie is thrilled to see him — and assures him nothing is wrong with his heart, though I’m not sure how much knowledge can really be gleaned from 10 seconds with a stethoscope.

Later, Toni finally gets in touch with Bellamy, telling him she must meet him in Chicago in order to give any answers. But upon arriving at the bar where they agreed to meet, Bellamy only encounters a woman that he remembers from his stint at the police station (and one of her associates, who tries to chase Bellamy, but loses him in the crowd). Toni confesses to Bellamy that he was set up, adding that she has no interest in learning more about the Returned and can’t offer him any more answers — making her Resurrection‘s Least Helpful Character, by far! At his Chicago apartment later that night, Bellamy finds the same woman from the police station sitting in his living room (uh, creepy), who offers him a new job assignment that requires spying on the Returned and reporting back to the government with his findings. When Bellamy is appalled that she’d even ask such a thing, the woman drops a major bomb on him: “You can refuse. We’ll just put you with the rest of them.” (It’s kind of like finding out Bruce Willis was dead the whole time in The Sixth Sense! Er, spoiler alert, I guess.)

That’s right: Via flashbacks, we see that Bellamy attacked one of the guards at the police station and tried to wrestle his gun away from him. In the process, Bellamy was shot through the heart (hence the chest pain he’s been experiencing throughout the hour), and just like that, he was dead — until he woke up on Arcadia’s border. Of course, the premiere doesn’t exactly touch on Bellamy’s actual identity as Robert Thompson (which we learned of in the Season 1 finale), but at least we know the agent is indeed capable of returning from the dead. MOTHER MAY I? | Although the number of Returned seems to have plateaued in Arcadia, there’s one more resurrection that’s particularly significant: the return of Margaret Langston (played by Game of Thrones‘ Michelle Fairley), mother of Henry and Fred. Jacob wakes up in the middle of the night and heads to the town cemetery, where Margaret is standing outside of her own grave. The next morning, when Henry finds his formerly deceased mama working in his garden, he welcomes her with open arms — but Fred, on the other hand… not so much. In fact, the sheriff has been hitting the bottle pretty often lately, now that the town (and his own daughter) has turned against him for calling in the Army and sending many of the Returned away. Fred refuses to believe that it’s really his mother who has come back from the dead, but Margaret pays him a visit in person that evening, when he’s on the verge of suicide, and comforts him as he sobs. (And Fred really seems to need the comfort: Earlier that night, he gets plastered at the local bar, then lets Elaine take a joyride in his police car and stops just short of kissing her as they swap personal stories. Ick.)

* Rachael and Tom get an ultrasound done at the hospital, where Maggie reveals they’re having a boy. And even though Maggie’s tone becomes serious when she estimates the baby is really four months along instead of the three she had initially calculated, Rachael still refuses to see a real OB-GYN, for fear that she’ll be judged for her Returned status.

* In case you were wondering where the potential romance between Bellamy and Maggie went, the opportunity presents itself once more when Maggie reveals that Dr. Ward — who foiled their plans last season — has returned to Maryland and won’t return Maggie’s calls. Then again, Bellamy’s whole back-from-the-dead vibe could be a major buzzkill for the pair.

What did you think of Resurrection‘s sophomore debut? Grade the episode via our poll below, then hit the comments to back up your choice!