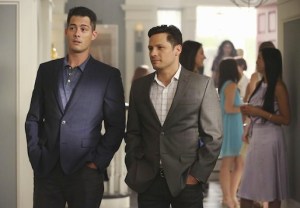 Good (and bad) people of the Hamptons, take note: Revenge‘s Officer Jack Porter is on the beat.

And the fact that the former barkeep now has a badge, gun and the authority to right wrongs, star Nick Wechsler says, means we’re going to see Emily’s eternal flame in a “new light” this season.

In advance of the Season 4 premiere (Sunday, 10/9c), Wechsler gave TVLine some scoop on how Officer Porter will lay down the law and hints at a situation that’s “lighting a fire under Jack’s ass a bit.”

TVLINE | So Jack becomes a police officer this season?
Yeah… I wish he’d done it when Conrad was still alive and he could have empowered himself against Conrad. But he became a cop to empower himself against all injustice, against any further injustice done to anyone he cares about… He wants to do his small part and right wrongs, you know? It’s akin to what Emily is doing, except it’s legal.

TVLINE | We’ve heard that his new partner, Ben, “will have great energy with Emily.” What might Jack think about that?
Well, the dude has an interest in Emily. And Jack’s not okay with that. It’s simple. It’s like, I think Jack has been respecting Emily’s like mourning so much. If we simplify the obstacles to them being together for each season: First season, it was he didn’t know who she was. Second season, he didn’t know who she was, and he fell for this girl that he thought was her and had a kid with her. Third season, he knew who [Emily] was, and the wife had passed away, but he was furious with her… Actually, and her being with Aiden.

But this season, they’re going to have the same obstacles… But now she’s going through kind of what Jack was going through when he lost Amanda, this form of heartbreak. So [Ben’s] just going where I can’t, it would be crass of me to pursue her now. But I will say that now that like the anger has faded and I’m not with anyone else, I’m not distracting myself with anyone else, yeah. She’s still that girl I wanted my whole fricking life.

TVLINE | And Margaux is completely out of the picture for him?
Yeah… You’re looking at the same characters in a new light this season, and it becomes a different thing. Emily completed her revenge last season. She’s trying to sort of readjust, you know, trying to live in a world that the rest of us live in, and there are repercussions for her actions. Some of what she did comes back to haunt her, and Victoria is one of those things.