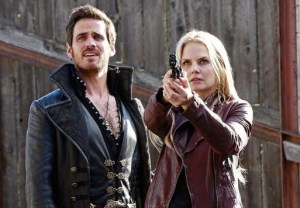 ABC’s Once Upon a Time, after four months of buzz, finally opened Season 4 and its Frozen-themed arc. Did seeing Elsa, Anna et al come to life give you chills, or leave you cold?

IN THE ARENDELLE THAT WAS…. | Even with all the build-up, Once‘s take on Frozen was even more faithful (if sometimes a bit on-the-nose) than I expected. In flashback, we see Elsa and Anna’s parents — King Agdar and Queen Idun, dressed exactly as they were in the movie — on their fateful voyage to, supposedly, the Northern Isles. Just before the churning sea consumes the ship, Idun scrawls a message-in-a-bottle to their daughters, insisting to her husband, “They must know”… something. Five years later, Elsa and Anna are visiting their parents’ grave site, before Elsa lightens the mood with a surprise for the bride-to-be: Mom’s wedding gown. But as Anna tries it on, Elsa discovers their mother’s diary, which suggests that it was Elsa’s fault that they took that ill-fated voyage, because they were out to “stop” her terrifying powers.

Seeking more intel on what their parents were out to accomplish, Anna consults her “future in-laws,” namely Pabbie (voiced by John Rhys-Davies and looking just like the movie’s rock troll). He knew not of the king and queen’s mission, but says they were in fact headed to a place called Mist Haven. Knowing how badly things went the last time Elsa abandoned Arendelle, Anna says she will travel to Mist Haven by herself, hoping to find out what secrets await there. Elsa tries to stop her sis, but Kristoff (Nice haircut mention! Bad frosting excuse!) stalls his future sis-in-law long enough to allow Anna to embark for Mist Haven — or as it is otherwise know,n The Enchanted Forest.

IN STORYBROOKE…. | The ish is still hitting the fan, as Regina storms out of Granny’s diner, having been dealt the bombshell that Emma brought Robin’s “dead” wife Marian back through time. Emma tries to state her case, but Regina notes, “The more you try to help, the worse my life becomes.” Marian launches into a rant about how everyone is all buddy-buddy with the Evil Queen, to the point that Regina almost unleashes a can of fireball, but instead Madam Mayor exits stage left, leaving Henry to worry that his mom will go evil again, after having come so far.

The next morning, Emma, Snow, Charming and Henry are taking Prince Neal for a stroll when Grumpy runs down the street to declare the town “under attack!” He relates how he and Sleepy (worst designated driver ever) got frozen in their tracks the night before by someone with ice magic. Emma and Hook follow a frosty trail, but just as they get close to Elsa, the frightened ice queen summons a giant snow monster. The “evil snowman,” as Grumpy labels him, makes tracks for the forest, while Elsa, still in hiding, catches a glimpse of a newspaper headline about Mr. Gold’s wedding. Speaking of….

Belle has commandeered a vacated mansion — one that apparently came over during the last curse — for her and Rumple’s honeymoon. There, and magically changed into appropriately formal duds, they partake in a wonderful ballroom dance, to the infamous “Beauty and the Beast” theme no less. Later, Rumple — who earlier had conversed with Baelfire’s tombstone about his struggle to be the better man his son died for — secretly retrieves the Dark One’s dagger from Belle’s purse, to work some hocus pocus on a curious tchotchke in the mansion. And as he does so, it transforms into… the sorcerer’s hat.

Regina meanwhile gets a visit from Robin, who says that though his feelings for her are real, his “code” dictates that he honor his and Marian’s “till death-that-sticks do us part” vows. This leaves Regina searching for a way to reclaim her happy ending, so she fetches Sidney Glass from his cell in Section 108 (heh) of the loony bin (keypad lock combination 8-1-5, heh). Regina observes how Marian’s happy ending, as detailed in the storybook, seems immutable, so she somehow needs to be “removed.” Sidney interprets that to mean his queen is in need of his services as her “murderous arm,” how he knew Regina, his No. 1 crush, would never forget about him. “Riiiiight,” Regina eyerolls, before explaining that she needs a “more elegant touch” in this situation. So at first, she has Sidney — returned to his mirror prison — show her who Marian was in the past and why the Evil Queen decided to kill her. That way, Regina can travel back through time and kill her before Emma can save her.

Back in the forest, no bows, bullets or even blasts of Emma’s magic can stop the snowman. Rather, the creature KOs almost everyone, then targets Marian — before Regina shows up. It appears that Regina ignores her rival’s pleas to be saved and poofs away, but then she materializes behind the monster to strike him down with a fireball. “Welcome to Storybrooke,” Regina says to Marian. Afterward, Hook confronts Emma again about her obviously avoiding him in the wake of their steamy clinch the night before. She explains the guilt she feels about Regina/Robin, but when Hook suggests more is at play, she reassures him with a tender kiss: “Be patient.” Aye!

Later, spurred by a pep talk from Emma (who as Savior is resolved to give everyone their happy endings), Regina decides on a different approach to remedying her love life — to find the person who wrote the “cursed” storybook and force him/her to give her what she deserves. “It’s time for villains to get their happy endings,” she pronounces.

As the hour closes, we see Elsa find her way to Gold’s shop to retrieve the snowflake necklace that she had given her sister (and was conveniently displayed in the newspaper wedding photo). “Don’t worry, Anna,” the ice queen thinks aloud. “I will find you.”

NOTABLE QUOTABLES | “Well, that party went south fast”…. “She’s awfully vanilla. Can you blame me?”…. “He won’t smell like that forever”….. “Want to go home and see what’s on Netflix?”/”I don’t know what that is, but sure!”….”I can probably tell you if you’re wearing too much eye makeup, but….”

What did you think of Once Upon a Time‘s Season 4 premiere? Who were the king and queen hoping to meet in Mist Haven? What sorcery hath Rumple uncovered? (And whose mansion is that?) And does Sven qualify for our Quotes of the Week column?

Want more scoop on Once Upon a Time? Email insideline@tvline.com and your question may be answered via Matt’s Inside Line.