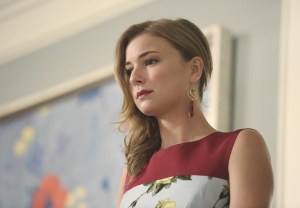 If you’d never seen Revenge before, Sunday’s season premiere was a pretty good time to join the party — and not just because every character literally recapped (out loud) what they’ve been up to for the past three years.

The ABC sudser has essentially hit the reset button on itself: Former Hamptons queen Victoria is now powerless, Daniel’s selling everything but his pretty face, Jack’s sporting a spiffy new cop uniform and Emily is living large at Grayson Manor (new name TBD) with nary a Sharpie in sight. In fact, the only Hamptonite who even remotely resembles his pre-Season 4 self is Nolan, who remains every bit the color-coordinated, zinger-slinging party boy we’ve known and loved.

VICTORY, VICTORIA! | After her first escape mission proved to be an utter failure (thanks for nothing, Lisa Simpson!), Victoria made a new ally, one that came equipped with a getaway car… of sorts. With the sprinkler system serving as a distraction — and also giving her a gorgeous, glistening glow — Miz Grayson strutted her way out of the looney bin and headed straight for Chez Thorne. Her visit was brief: She awkwardly noted that she hadn’t been invited to Emily’s party (such a Maleficent move) before uttering a few veiled threats and sauntering off into the night… only to be accosted by a certain presumed-dead lover. Yes, folks, David Clarke is back! Again!

DADDY’S HOME! | Speaking of David, if you were hoping the season premiere would bring about the Clarke family reunion we’ve all been waiting for, my condolences. Despite his All My Children-esque declaration (“I’ve got… unfinished business”), David did not reveal himself to Emily in this first hour. As executive producer Sunil Nayar recently told TVLine, the plan is to “roll him out pretty slowly,” apparently beginning with Victoria.

CAUGHT RED(HEAD) HANDED | In other Grayson news, Margaux finally got Daniel to admit why he stepped down from the company. It was the same ol’ Daniel story — “Blah, blah, blah, then I woke up and she was dead” — only this time, he had Gideon to blame. So how will Margaux choose to deal with her half-brother’s latest wrongdoing? I’m hoping we’ll get another death by helicopter propeller… but I’m not holding my breath.

ROOKIE BLUE | So why did Jack decide to become a cop, you ask? For the record, it had nothing to do with making people forget about the time he kidnapped Charlotte; he literally couldn’t have stressed that point any more. According to him, he’s wanted to take up a badge ever since Amanda was killed, then again when Declan bit it. “Conrad had the cops in his pocket,” Jack told Emily. “I knew that if I became a cop, no one could pay me off.” (Oh, Conrad is dead, by the way. And not, like, David Clarke-dead. He’s actually dead.)

MEET THE NEWBIES | And what would a new summer in the Hamptons be without a few new faces? The Season 4 premiere introduced several additional players, beginning with Ben (The Client List‘s Brian Hallisay), a way-too-serious cop with the hots for Emily. We also met Nancy (another former Client List-er, Alicia Lagano) whose year went from bad to worse when she learned that Em’s pal Jennifer’s cheating husband was responsible for her fiancé’s death. Awkward.

Revenge-rs, what did you think of the Season 4 premiere? Do you miss the old show, or are you glad to see things get shaken up completely? Grade the episode below, then drop a comment with your full review.