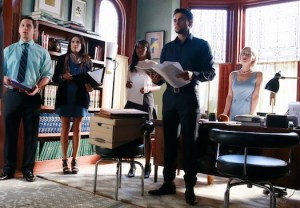 Tonight’s How to Get Away With Murder recap is presented with a hat tip to the legendary Dr. Seuss’ Green Eggs and Ham.

RELATED Scandal Recap: The State of the Unions

(And I say “I mean…” as a device to catch my breath and process SO. MUCH. PLOT.)

Episode 2, “It’s All Her Fault,” gives us more cause to believe that the murder of Annelise’s hubby Sam Keating (three months into the future, and a few minutes into an immolating BONFIRE) and the murder of Sam’s student Lila (one week in the past) are intimately intertwined. (I didn’t intend for that last phrase to sound so sexual, but every person on this damn show seems to have an undercurrent of lust coursing through his or her veins, no?)

Let’s break down the action in three distinct parts:

THE BODY IN THE WOODS/SAM | Yes, we’re back to the flash-forward of Connor, Laurel and Michaela in the woods. But wait, where’s Wes? He’s keeping his friends waiting — and Michaela panicking, saying she trusts Wes, but not “her.” Oh, and “it’s all her fault,” she adds. But who does she mean by “her”? Who does she think might convince Wes to go to the cops and pin the murder on his trio of co-conspirators? It appears as though the party in doubt is Wes’ neighbor Rebecca; after Wes returns to his pals and they stop to pick up lighter fluid to burn Sam’s body, he surreptitiously places a call from a burner phone and tells whoever is on the other end of the line that “we’re gonna protect you.” Later, after Sam is turned into so much ash, Wes speeds off to a seedy motel and finds Rebecca waiting; again, he’s all reassurances: “It’s done.” But is it possible that’s a classic Shondaland misdirect? Could Michaela be worried it’s Annalise who might sell them out? And could Wes be dialing his steely law professor and not his drug-dealing crush?

We get a few other interesting deets in the course of the hour:

* Laurel approaches Bonnie, worried she’s only made Annelise’s elite team because Frank is hot for her. But it turns out Bonnie is not the one to sit around and dish office dirt. She encourages Laurel not to waste valuable time on personal concerns, and instead use her energy “”to get Annalise to actually learn your name.” Oh snap! (Laurel later takes said advice to heart and helps give Annalise a key strategy to prove their client’s lack of guilt.)

In the present day, Rebecca gets arrested as a co-conspirator (along with Lila’s football player boyfriend) in Lila’s murder — and Wes gives her some good advice that she ought to have learned watching Law & Order reruns anyhow: Don’t say a word! Finally, Connor upsets his tech-spy paramour by pumping him (no pun intended) to hack into a witness’s email account, then later missing their dinner date. But Connor (who has real feelings! maybe?) begs for a second chance, and is even willing to act out the lyrics to “Pull Up to the Bumper” to gain forgiveness.

THE DEAD GIRL IN THE WATER TANK/LILA | Annalise finds her detective boyfriend with a gun in his pocket but decidedly unhappy to see her, considering she blackmailed him last week on the witness stand. “You won your case. You got laid. How can I be of service to you?” he seethes, threatening if she doesn’t leave him alone to tell Sam “every dirty, nasty thing” he did to Annalise under Sam’s roof.

But Annalise’s legal mind just cannot rest — not even when she’s home and in the midst of domestic “bliss.” She checks Sam’s cell while he’s showering, finds an innocent-ish email from Lila (who was spending the weekend volunteering at a homeless shelter — is that a euphemism for “sexytimes with the professor”?), and continues to give him looks of deep, unabashed suspicion.

“Were you screwing her?” Annalise finally asks an exasperated Sam about Lila. “I said no — absolutely not,” he responds. “Good eye contact,” she says, treating her hubby like she’s prepping a witness (one of the episode’s most scathingly funny moments). And then Annalise notes that it’s happened before. So Sam may not be asking to pay the ultimate price, but dude’s definitely been asking for trouble.

Annalise bolts, shows up outside Det. Nate’s house — while his ailing wife sits inside — and proceeds to implore him to check out Sam’s alibi the night Lila was killed. “Sam knew her — they were close,” she says, voice trembling with desperation. “You don’t do this to your husband — sell him out to your boyfriend,” Nate responds. But Annelise is in tears — and she’s so convincing, I wonder if she really thinks she’s got a killer in her bed at home. Or is it possible she’s the one who took Lila’s life — and is now using her knowledge of the law to frame her misbehaving spouse. The way Viola Davis plays it, it’s impossible to tell. Like Annalise says at the top of the episode, people are “unknowable” – and that’s why she doesn’t care if her clients profess guilt or innocence. Who can trust ’em, anyhow? (Snap poll: Do we care if Annalise is guilty or innocent, good or bad?)

She goes home and Sam wonders if their argument is behind them. “We’re good — I promise,” Annelise says, before seducing Sam with great gusto, then rolling onto her side and letting a single tear stream down her cheek. What in the whatting what is going on here?

THE BIG CASE OF THE WEEK | Oh, this one’s a whopper. Steven Weber shows up as a creepy, hunting-obsessed husband of Marjorie St. Vincent, a department-store heiress stabbed 16 times in her own bed. The episode’s best scene involves Weber acting out the prosecution’s theory of the murder on the blood-stained mattress — Annelise asked that the crime scene remain untouched until after trial — and using “pretty” Connor as the victim in the most erotically charged way one could act out a brutal stabbing. (I’m not saying I was turned on by the exchange, but… actually, I’m not going to finish this sentence.)

Things take a bad turn when it’s proven that Weber killed his first wife — and got away with it — while living in Switzerland, but it’s Laurel who saves the day when she does the simple math that Weber’s hunting skills don’t track with the all-over-the-corpse slaughter of Marjorie. Weber gets set free — while the defense learns it’s his college-age daughter who wielded the blade, as revenge for her poor biological mom.

Side note: Somehow, trial prep involves another scene where Annalise looks scintillatingly hot while leaning in verrrry close to Wes, who does his best terrified-puppy impression. #AlsoHot

On that note, I turn it over to you. What did you think of Episode 2 of How to Get Away With Murder? Are you officially obsessed, still on the fence, or already over it? And what are your working theories about Sam and Lila’s murders? Sound off below!