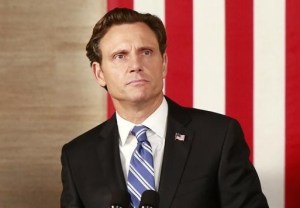 This week on ABC’s Scandal, Olivia and Jake battled over booty calls, Mellie’s private torment went public and Cyrus revealed to us that he apparently never saw Season 1 of The West Wing.

YOU ARE SO BOOTY-FUL… TO MEEEEE
Now that they have been deposited back in D.C., Jake gets himself a room at a hotel a stone’s throw from Liv’s place, so that he is available for “booty calls.” (As he explains it, it can’t always be her “summoning” him.) They argue the issue some — when Jake isn’t looking over the reports on Harrison’s death again and again, finally turning up something, implicating Charlie — until Liv ultimately shows up at Jake’s wearing little more than an undoubtedly super-expensive trench coat and proceeds to illustrate how damn fun it can be to get summoned.

LOVE & WAR
Speaking of: Cyrus “summons” Olivia for the purpose of a job, to find out why a high-profile couple that represents the face of gun control is dragging their feet to the State of the Union address. Visiting the marrieds in New Mexico, Liv discovers that they are almost literally at each other’s throats, each having had it up to here [my hand is under my chin] with their respective sob stories. Liv gets them as far as a D.C. hotel suite (with bickering, almost-“incesting” Huck and Quinn for babysitters), but all that gets her is a corkscrew in the husband’s leg. Olivia finally “fixes” things by promising to “spin” their respective careers after they get a much-needed divorce, and they put in their appearance.

THAT TIME DAVID ROSEN WAS MICHAEL JORDAN
RNC boss Lizzie (and I guess VP Andrew?) are not happy with Fitz’s nomination of Democrat David Rose for AG — and as is, the confirmation hearing is far from a cake walk, with a Senator Watson gunning for bear by dragging out all of David’s dirty laundry. Rosen, though, G-d bless him, fights the good fight, at one point likening his post-Defiance gig as a school teach to Michael Jordan’s flirtation with Major League Baseball. Lizzie then plays  dirtier, somehow digging up David’s fabricated domestic abuse charge, but Rosen busts out a sweet countermeasure: a B613 file to hold over Watson’s head, earning him the surly senator’s endorsement. (Blackmail? Nah. “I like to think of it as winning.”) Lizzie’s not done yet, though — and by episode’s end, we see the next phase of her plan involves sending a “sex worker” to seduce “lonely” Cyrus.

WHEN THE CHIPS ARE DOWN….
When Mellie is caught by the tabloids snacking in her Uggs and robe at Jerry’s grave, Fitz makes the first appeal, that she buckle up if just to show the country watching the State of the Union that she’s OK; no sale. Cyrus then makes a go, bringing up their respective losses of great love; no sale. Ultimately, it’s Abby — someone Mellie barely even knows — who snatches the magazine! from the First Lady’s paws and tells her how it needs to be, noting that there are Americans out there who also have lost children but don’t get months and months away from their jobs to grieve, how she does have a job, as First Lady, how the people who voted for Fitz need to see they made the right call. As the State of the Union rolls around, Fitz reunites with Liv and beseeches her to offer counsel. The result is an ad-libbed SOU bit in which Fitz acknowledges what his family has been through, lauds his “amazingly strong” wife Mellie — who’s sure enough in her seat, the recipient of much applause — and then (sorta clumsily) dovetails it into an argument for gun control. And though Mellie seemed rejuvenated a bit during the aforementioned moment, afterwards she breaks down in the residence, hysterically sobbing, as Fitz rushes to her side to console.

What did you think of this week’s Scandal? Are we feeling Olivia/Jake yet? Does the name Sam Seaborn mean nothing to Cyrus? How many times can Jake look at Harrison’s toe tag?