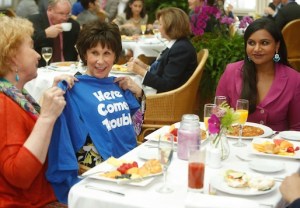 As far as adversaries go, Mindy, you sure found a worthy one in Annette Castellano.

Danny’s mom makes her debut in this week’s Mindy Project, an episode that explores the Castellanos’ family dynamic by thrusting Dr. L into its midst.

Or, more accurately, Mindy thrusts herself into the guilt-trips, hurt feelings and favorites-playing that Danny and Richie have endured for years — and watching Mindy Kaling and Cheers queen Rhea Perlman throw down is going to be one of my recurring joys this TV season, I can already tell.

While the episode is still hot like Annette’s piping pot of gravy, let’s take a look at what takes place in “Annette Castellano Is My Nemesis.”

Danny eventually confesses that he kind of hopes his mom will die before he has to tell her about Mindy. Two things I loved about this exchange: 1) Danny doesn’t do the typical sitcom-guy-freak-out when Mindy talks about their wedding as though it’s a foregone conclusion, and 2) Danny admits again that he has no idea what religion Mindy is (“orthodox something?”). Mindy tells him not to worry: She has a “foolproof, four-point, mom-catching plan” that always works.

BRUNCH BLOODBATH | Min puts her plan into action at Annette’s birthday brunch, an event to which Danny’s ma invites her (but doesn’t expect her to show up). Still, Dr. L wins over the prickly woman by sticking to the basics: complimenting the birthday girl, finding common ground (thanks, Castle!), bestowing gifts upon her and her best friend and agreeing with everything Mama Castellano says… no matter how egregious, offensive or nonsensical.

But when it comes time for the boys’ gifts, Mindy can’t abide the way Annette fawns over Richie’s lame stuffed bear from the airport (“Hudson News! La-di-dah!”) but says that Danny’s generous new stove, complete with installation, is “too much.” So, breaking with Bullet Point 4, Mindy disagrees with Annette and sticks up for her boyfriend. The move is not well received, and it turns into Annette yelling that she’s sorry Danny has to bankroll her life, including her “QVC dolls and the thousands I spend on my phone game, Coffee Crunch!”

RELATED Quotes of the Week from The Mindy Project, Girl Meets World and More

DOG DAY AFTERNOON | Meanwhile, back at the office, Peter thinks Tamra is taking advantage of Morgan’s sweetness by making him do things he doesn’t want to do, such as get rid of his 40 (!) dogs. As it turns out, the adult-onset pet allergy she claims to have is real, and after an epipen injection and some puffs on an inhaler, she reminds Peter that his trust issues with Lauren don’t necessarily translate to everyone else’ relationship. (Oh, and Morgan gets to keep his pups, except the one he thinks Peter should have.)

MINDY MAKES IT BETTER | In his office, Danny sadly looks at an awesome photo of the Castellanos in Christmas sweaters and laments that her grudge against him and Mindy may last a decade. “Italian people don’t get over things,” he informs her. “They let their anger fester and ferment, growing stronger over time. It’s why our wine’s so good.” The always-impatient Mindy thinks this is rubbish, so she tracks Annette down in Staten Island, where she’s injured herself after going back to cleaning hotel rooms for extra cash.

After Mindy pops the woman’s hip back into its socket, she susses out that Annette really just wants to make Danny feel guilty; Ma shoots back that Danny is strong enough to handle it, but Mindy (correctly) states that everyone wants to be taken care of every once in a while. Mrs. Castellano realizes that her son “finally found a strong, immigrant woman strong enough to take care of him,” and it’s kind of an insult, but Mindy just goes with it. Next thing you know, Danny and Mindy are helping Ma make dinner at her house. Annette praises the stove’s quiet fan, and all is well… until Annette catches Mindy and Danny making out in his childhood bedroom. Many jokes are made re: Danny’s state of arousal (“A boy’s bedroom should never have an errection in it!” Annette yells), and the episode comes to a close with the Castellanos marveling at Mindy’s ignorance of sports history.

Now it’s your turn. What did you think of the episode? Would you happily watch an installment of Richie’s Wine Time? Did you note how Tamra didn’t return Morgan’s “I love you?” Is dejected Peter one of the saddest things you’ve ever seen? Sound off in the comments!