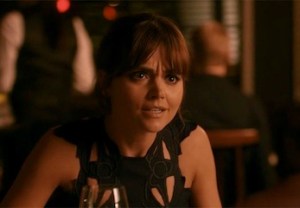 To call “Listen” one of the finest episodes of the modern Doctor Who era would hardly be an overstatement — and while it bears noting that we’ve been knocked out by Peter Capaldi’s take on the titular Time Lord this season, we wanted to single out Coleman, who’s been given more room to shine this season as plucky companion Clara Oswald. And indeed, she deserves a good chunk of credit for the hypnotizing hour of creepiness, romance and heartwarming emotion (served with a liberal splash of Whovian mythology).

The episode was built around Clara’s budding romance with fellow teacher Danny Pink (Samuel Anderson), giving Coleman a chance to bring classic rom-com flirtiness (and occasional exasperation) to a first date that was intermittently adorable and awkward. (Is it impertinent to say Kate Hudson, J.Lo and Cameron Diaz should all be a little nervous about Coleman’s post-Who career prospects?)

When Clara’s mental connection to her new suitor wound up leading the TARDIS back in time to Danny’s childhood, however, “Listen” became an altogether different kind of ride — one that mined the innate human fear of what might silently lurking beneath our beds. As Clara’s calm reassurances began to evaporate at the Doctor’s dire warnings against looking at the mysterious figure that took form beneath Danny’s bedspread, Coleman perfectly captured an abject terror muted by her brave efforts to protect the child (and future love interest) in her midst.

In the episode’s final act, though, as Clara came face-to-face with Danny’s and her time-traveling great-grandson, we were treated both to the joy of Clara’s dawning realization about where her love life was headed, as well as to a fantastic deepening of her relationship with the Doctor. When the Doctor’s lifelong dread of the unseen/unheard catapulted the TARDIS back in time to his home planet, Clara encountered her alien friend as a frightened and lonely child. As she stroked the despondent boy Doctor’s hair, she delivered a speech so stirring and tender — “Fear is a super power. Fear can make you faster, and cleverer, and stronger” — that it felt like an entirely plausible impetus for the Doctor’s purpose and path over his thousands of years of existence (not to mention his penchant for traveling with a companion). That’s complex, heady stuff — deftly navigated — and for that reason, Coleman lands our “Performer of the Week” trophy. Well, half of the trophy… THE EPISODE | “The Garrison Commander“

THE PERFORMANCE | Menzies’ face gives absolutely nothing away, making it tough to tell what his characters are thinking. It’s why he was such a good choice to play both Outlander‘s Frank and his ancestor Black Jack, and it’s a big part of why we were in awe of his work in the latest episode.

Menzies used Jack’s genteel mannerisms to lure Claire in, making her warm slightly to the man who’d insulted and attacked her weeks before. But the more Jack spoke, the more Menzies revealed exactly how twisted his character truly was. Menzies’ delivery of the monologue about whipping Jamie — at turns detached, vicious and threatening — was chilling.

But even after revealing Black Jack as a sadist, Menzies managed to seem contrite. His musing about whether Jack’s soul had a shot at redemption took on a dreamy air… which is why his swift descent into physical violence was such an effective sucker-punch to the audience (and a literal one to poor Claire). Contrast that level of inhumanity with the tender way Frank – remember, also played by Menzies — caressed his wife’s face in a flashback earlier in the hour, and you’ll understand why we found the actor’s artful brutality so incredibly captivating. HONORABLE MENTION | We thought The Mindy Project‘s Chris Messina couldn’t top Danny’s Aaliyah dance from last season. The Season 3 opener proved us wrong – and it was so, so right. Sure, Messina hit the perfect tone as he apologized to Mindy on the fire escape, striking a balance between apologetic and confessional at the same time Danny assured his girlfriend their relationship was “real.” Call us shallow, but we were far more taken with the way Messina fully committed to the episode-ending striptease to “American Woman.” The moment was funny, hot, touching and perfectly in character; it’s only because we’re such dedicated professionals that we’ll be watching that backbend-hip-thrust move over and over and over… HONORABLE MENTION | All summer long, Finding Carter‘s Alex Saxon has been charming us with his funny, but deftly intuitive portrayal as sweet stoner Max. Then in Tuesday’s season finale, the actor showed us a surprisingly serious side of his character, one that was angry and broken down. As Max struggled with being trapped in the hospital, lashing out at his doting girlfriend Taylor, he made the crushing decision to break up with her. It was for the sake of both of their futures, but Saxon’s tears and cracking voice gave away Max’s reluctance to do the right thing and let Taylor go. Still, it had to be done, and when it was, the pain was so real, we felt like he was breaking up with us.