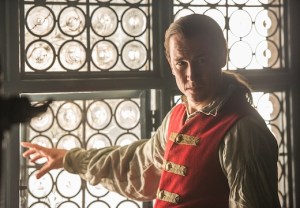 The episode is a big one, with regard to what comes next, but it certainly wasn’t my favorite of the season so far – mostly because of the way Claire and Jack’s conversation at the garrison played out.

I’ll explain in more detail when we reach that point in the story, and if you disagree, you can flog me with a virtual cat o’nine tails in the comments. (Like Jamie, I won’t break!) Until then, let’s review the events of “The Garrison Commander.”

BE OUR GUEST | At the end of the previous episode, a Redcoat asked Claire whether the Scots with whom she traveled were friends or kidnappers. We pick up with Ms. Beauchamp assuring him that she’s a guest of Clan MacKenzie, but the soldier asks her to come along to the nearby garrison and speak with his leader, anyway. So Claire, Dougal and a bunch of English soldiers make their way to the nearby village where the Redcoats have set up shop. There, Claire is treated like a princess by the man in charge, Brigadier General Thomas, a slightly foppish officer who loves his claret and can’t stand the Scottish. Claire’s willing to overlook the fact that Thomas is kinda a creeper who treats Dougal like a dog, because the brigadier general happily agrees to send her to Inverness right away. The travel plans agreed upon, Thomas, Claire and a bunch of officers continue to enjoy a lavish meal. “To homeward journeys, may they be uneventful,” Thomas toasts… and then six-feet-two-inches of eventful bursts through the door.

BLACK SKIES AHEAD | The new arrival is “Black” Jack Randall, Frank’s ancestor who attempted to rape Claire just after she arrived in 1743. Claire’s face looks like someone just switched her venison for haggis, but both she and Randall feign ignorance of each other when Thomas introduces them. Now, if I were a time-transplant who’d simultaneously been granted the thing I’ve wanted for weeks and come face-to-face with the man who nearly violated me, I like to think I’d take a moment of silent meditation to reflect on how best not to make waves in this incredibly messed-up situation. Our Claire? She takes a different tack.

As the English soldiers discuss recent violence perpetrated by Highlanders, Claire can’t help but stick up for her band of bedraggled brothers. “Scots just want the same freedoms we enjoy,” she says, causing every man in the room to look at her like she just belched the alphabet. “It is their land, and we are occupying it.” Actually, Thomas reminds her as he eyes her suspiciously, it’s the king’s land. Thank goodness (at least for Claire) her outburst is forgotten as a soldier interrupts with news: An ambush has left a Redcoat with a very badly wounded arm.

In the taproom downstairs, Claire finds Dougal, who seems relieved that she’s OK. (Side note: Tiny aww.) He assures her Jamie and the gang weren’t behind the fight that maimed the soldier, but she sends the war chief away for his own safety, anyway.

WHIP IT BAD | The soldier’s arm has to come off, a bloody, painful and anesthesia-free procedure marked by lots of screaming (from the man) and lots of grimacing (from Nurse Beauchamp). But even that distasteful experience is preferable to returning upstairs, where Randall continues his interrogation of her – only now, they’re alone, leaving Black Jack free to let his freak flag fly.

It all starts jovially enough. He apologizes for their encounter in the woods, telling Claire, “I look forward to revealing my true nature to you.” Well, that’s a totally normal thing to say to someone you barely know, isn’t it? We finally get to what Randall is after: He wants proof of Dougal’s Jacobite fundraising, and he wants Claire to provide it – oh, and he’s not afraid to beat it out of her.

Again, I might hush it up at this point. Claire chooses instead to remind Randall of the time he whipped Jamie nearly to death, a memory the twisted captain recounts with near-orgasmic intensity as we watch a flashback. “I had intended to pace myself. One hundred lashes is fatiguing to the arm,” he tells a horrified Claire as Flashback Randall fervently makes Jamie look like a side of overcooked corned beef. (And yes, Jack, your lactic acid build-up is really at the top of everyone’s list of worries right now.) But Jamie doesn’t cry out, even when his feet slip in a puddle of his own blood. “The boy would not beg for mercy,” Jack says, Tobias Menzies doing a really good job of making me hate him as he describes the “exquisite, bloody masterpiece” he and Jamie created.

Claire is crying for real now, and as Randall talks in a detached manner about the darkness growing inside him, can you blame her? They have a discussion about whether there’s hope for his soul – Claire is on the pro side – and he dangles the trip to Inverness in front of her before sucker-punching her and ordering a scared corporal to bend it like Beckham right into Claire’s belly. True nature? REVEALED.

A SIMPLE PLAN | Generally, I’m not one to grouse about changes between books and movies or TV shows. Lit happens, people. But having Randall — instead of Dougal, as in the book — recount Jamie’s whipping struck me as too intimate for this point in Jack and Claire’s story. Randall is an educated man who’s very suspicious of this woman… but then he coughs up some of his darkest feelings about violence and submission while in her presence? Yes, it’s mostly to intimidate her, but the haymaker to the stomach probably could have accomplished that goal all on its own. (Are ye with me, or do ye think me daft? Whether you’re a Newlander or an Oldlander, I’d love to hear your thoughts in the comments.)

Anyway, thank goodness for Dougal, who swoops in, threatens war and gets Claire a temporary reprieve from Randall’s sadism. She’s due back at the fort the next evening, but Dougal – who decides she’s not a spy after she drinks from a “magic” spring that makes you tell the truth (just go with it) – has an idea about how to get her away from Black Jack for good. She needs to marry a Scottish man, thereby becoming a Scottish woman, who by nationality is not compelled to submit to the commands of a British Army officer.

Claire, no doubt envisioning a future full of gray beard hairs in her bed and surly grunts over the morning porridge, fears he means she should wed him. But no, though “the idea of grinding your corn does tickle me,” he says, he’s got someone else in mind. WHO SAYS ROMANCE IS DEAD? | And here we are, Outlander fans: the moment where Claire realizes she has to marry Jamie in order to survive. Young James, for his part, isn’t mad about it. After all, as he points out to her while they share a drink, he’s poor, and there’s a price on his head, making him a less-than-desirable husband UNLESS YOU’RE A PERSON WITH EYES.

“Doesn’t it bother you that I’m not a virgin?” she asks, Caitriona Balfe imbuing the line with the desperation of a sinking woman making one last grab at a buoy. “No, as long as it doesna bother you that I am,” he replies, grinning. “I reckon one of us should know what they’re doing.”

Now it’s your turn. What did you think of the episode? Were you as struck by that stunning drone shot (the one of Claire and Dougal approaching the spring) as I was? Are you verra much awaiting next week’s installment? Sound off in the comments!