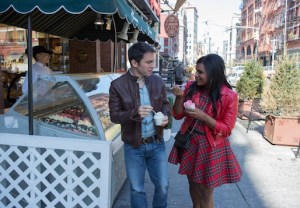 I know there’s more to The Mindy Project‘s Season 3 premiere than the final minute-and-a-half, but honestly, I’m having trouble focusing on anything else right now.

Because in those final 90 seconds, star Chris Messina sees Danny’s Secret-Santa dance from Season 2 and raises it a striptease that would make Channing Tatum say, “Dayum.” Messina wholeheartedly commits to what could’ve been a silly footnote on the episode, and the result is both super hot and very funny. And really, what more could we ask of the Fox comedy’s return?

Let’s review what happened in “We’re a Couple Now, Haters!,” then you’ll let us know what you thought about the episode. Sound good?

THE HONEYMOON PERIOD | We pick up with a montage of Mindy and Danny as a couple, with his voiceover discussing how improbable their pairing would’ve seemed years ago and her voiceover describing him as the man of her dreams: “a devout Catholic divorcee, with some pretty serious dad issues which, for a single thirtysomething woman, is not too shabby.” He makes her eat cantelope. She makes him wear sherbet-colored Polo shirts. But they’re both oddballs who love sleeping together, so it works (as does Danny’s tush shake to “More Than a Feeling,” which takes us through the new opening credits. Nice touch, MP.)

ZIP THOSE LIPS | When Peter comes to Danny for between-the-sheets advice (“I heard you’re good with the mouth”), Dr. C lights into Mindy for her inability to keep anything private. And though she promises she will, the discovery of a hot pink thong with the word “Diamond” bedazzled on it leads Mindy to discuss Danny’s possible sexual past with her co-workers. Morgan helpfully points out that the thong is a man’s, not a woman’s, which helps Mindy discover that her current flame used to Magic Mike it up for lusty ladies willing to make it rain.

Meanwhile, Danny finds out that Jeremy is secretly romancing Peter’s girlfriend Lauren, and he shares that gossip with Mindy. Guess what she does with it? When it gets back to Danny, via Tamra (of course), Mindy and Danny have it out about him not saying enough and her saying too much. Because of her big mouth, “I don’t trust you with my secrets,” he confesses, causing a rift between the two.

“WHOA NELLY”| While Peter and Jeremy throw down over Lauren, Danny goes to Mindy’s to apologize. She returns the sentiment, explaining that she talks about their relationship so much because that makes it real. “It’s real,” he softly assures her (aww), then goes on to reveal more secrets about his youth — including that his family was so poor when he was a kid, he carried a purse to school instead of a backpack. Mindy kisses him, and all is well.

Then, all that’s left is for Danny to crank up Lenny Kravitz’s cover of “American Woman” and shake what his mama gave him. The dance is a thing of beauty, punctuated by Mindy hilariously grabbing her glasses so she can get a clearer view. Danny struts. He rips his shirt off. He body-rolls and palms his package and it is glorious. My feelings about the whole thing are best summed up by Mindy’s final line of the episode, uttered just after the camera pulls back on Danny giving her a lap dance: “Whoa, Nelly.”

What did you think of the episode? Grade the premiere via the poll below, then back up your choice in the comments.