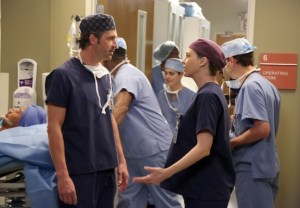 Grey’s Anatomy‘s upcoming 11th season will find Derek and Meredith wading through some of the choppiest waters of their marriage. In fact, the seas will be so rough that series creator Shonda Rhimes is no longer ruling out the dreaded B-word. (Quick recap: Mer is refusing to give up her career in Seattle to follow Derek to his dream job in D.C.)

Having said that, Rhimes admits a consciously-uncoupled Derek and Meredith is far less compelling to her than a still-together-and-working-through-their-issues Derek and Meredith. “I was not interested in telling the story of a really good marriage that breaks up because of this,” she explains. “There’s work involved in keeping an amazing marriage amazing, and I would personally like to watch what happens when [they try] to fight through it.”