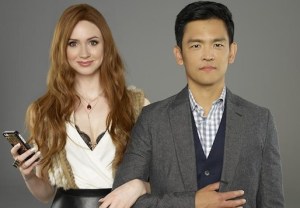 THE COMPETITION | CBS’ NCIS, NBC’s The Voice, The CW’s The Flash, Fox’s Utopia

THE SET-UP | Loosely based on My Fair Lady and written by Suburgatory‘s Emily Kapnek, Selfie stars Gillan as Eliza Dooley, a pharmaceuticals sales rep overly obsessed with outward beauty as well as her standing in social media. In the wake of a mortifying public incident, Eliza beseeches her company’s branding whiz, Henry Higgs (Cho), to improve her image. (There’s no “Rain in Spain” per se, but Henry at one point does rattle off what happens to be a rhymed list of suggestions.)

THE FIRST IMPRESSION | The worst thing Selfie has going for it is a potentially polarizing title. The best thing it has going for it is its status as the fall’s best new half-hour comedy, and that’s in large part due to the highly entertaining dynamic between its leads. Even minus her native Scottish accent, Gillan is endearing and — despite Eliza’s considerable foibles — quickly gets you rooting for her extremely egocentric alter ego, as she begins clumsily sampling Henry’s advice. Cho’s Henry, meanwhile, has little tolerance for Eliza’s chronic status-updating and speaking in #hashtags, yet therein sees an opportunity for his greatest re-branding project yet. But neither is Henry a perfect human, and the show’s obvious endgame is for both of the unlikely allies to emerge the better for knowing each other, as evidenced in an incredibly sweet closing scene.

Bristle if you will at the title, but Selfie‘s stealthy mission is to in fact capitalize on such distaste for social media addicts by deftly mocking Eliza’s habits and tendering the possibility of a life-changing “make-under” — with some additional help from her frenemy neighbor Bryn (Rachel). Randolph plays the company receptionist (a highlight of many of the comedy’s trailers), while Harewood is Henry’s bromance-obsessed boss.

THE TVLINE BOTTOM LINE | In addition to its title, Selfie‘s obstacles include an unenviable time slot, asked as it has been to self-start ABC’s Tuesday line-up versus TV’s most watched drama, NBC’s stalwart Voice and The CW’s buzzy Flash. (Paired with the flawed Manhattan Love Story, the freshman comedies feed into Agents of S.H.I.E.L.D.’s new 9 o’clock home.) Worse, if Selfie fails to attract and retain Friends and Followers, there’s no logical place for ABC to shuttle it to.

Watch a preview for Selfie, then vote in our poll below.