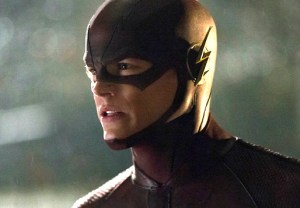 THE SET-UP | ‘Member the lightning bolt that zapped Barry Allen back in Central City at the close of the Arrow episode “Three Ghosts”? Well, let’s first rewind a bit to show you Barry’s mild-mannered life before visiting Starling City, and then we’ll fassssssst-forward to months later, when Barry finally emerges from his coma and embarks on a, um, speedy recovery.

THE FIRST IMPRESSION | The bright ‘n’ bubbly cousin to dark ‘n’ brooding Oliver, The Flash affords effortless entry into Barry Allen’s world, efficiently introducing father figure Det. West and his daughter/Barry’s unrequited crush Iris, “pretty boy” cop Eddie Thawne and S.T.A.R. Labs super-genius Harrison Wells (whose haywire particle accelerator is to blame for the pulse of energy that not only made Barry fleet of feet but spawned other metahumans within its radius). On the casting front: Anyone who perhaps fretted that Gustin was too slight for the lead will promptly have such concerns quashed; Patton has the requisite crackling chem with her TV “brother”; and Cavanagh-as-Wells was a rather inspired call. (Future episodes promise to shed greater light on Panabaker and Valdes as Wells’ wonks — and at least one had better follow up on a certain and infamous “escapee” from S.T.A.R. Labs!)

Turning to the non-human effects, DC Comics Chief Creative Officer Geoff Johns had promised a “fresh and exciting… cinematic” approach to the scarlet speedstering, and while the close-ups flirt with being a touch too comical, the longer-range and in-profile views of Barry’s booking are quite electric and jibe with the series’ overall feel, which is one of fun, fun, fun.

THE TVLINE BOTTOM LINE | With NCIS obviously skewing older, ABC trotting out untried comedies and Fox’s reality series Utopia a wild card, the biggest obstacle in The Flash‘s path is perhaps The Voice. But if the Barry & Co. can manage half of what another comics-inspired series, Marvel’s Agents of S.H.I.E.L.D., did versus NCIS and The Voice — a possibility, given the plan to encore early episodes out of Arrow — The CW can chalk up a quick win.

Watch a video preview for The Flash, then vote in our poll below.