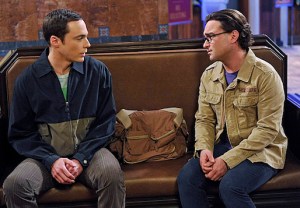 As reasonably anticipated yet still worth reporting, production on Season 8 of CBS’ The Big Bang Theory has been officially postponed, as the five leads wait to hammer out new contracts.

“Due to ongoing contract negotiations, production on The Big Bang Theory — which was originally scheduled to begin [Wednesday, July 30] — has been postponed,” reads a statement from Warner Bros. TV, which produces TV’s most watched, highest rated comedy.

Production has been pushed back one day for now, with the situation to be reassessed on a day-to-day basis.

Jim Parsons, Johnny Galecki and Kaley Cuoco-Sweeting reportedly are aiming to increase their per-episode salary from north of $300,000 (plus a quarter-of-a-point on the back end) to possibly a cool million, while Simon Helberg and Kunal Nayyar (currently fetching $125 and $75K per episode, respectively) also are seeking sizable raises.

Later-season additions Melissa Rauch and Mayim Bialik are on different contract cycles, and thus do have deals for the coming season.

Back in March, CBS renewed Big Bang for three more seasons — through May 2017 — contingent on the cast’s contracts staying current.

Earlier this month at the Television Critics Assoc. summer press tour, CBS Entertainment president Nina Tassler said that she is “very confident” new deals will be struck in time to deliver the hour-long Sept. 22 premiere, which means negotiations theoretically could extend as late as Labor Day weekend.