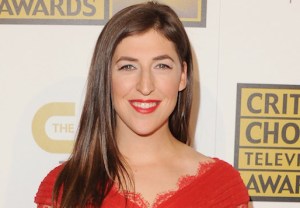 Per Entertainment Weekly, Bialik will cohost with Peter Funt, son of Candid Camera creator Allen Funt. The on-camera pranking series will debut Monday, Aug. 11 at 8/7, airing new episodes every night that week through Thursday, before settling into a weekly Tuesday schedule.

♦ Speaking of Big Bang Theory, our sister site Deadline reports there has been no “significant progress” in contract renegotiations for stars Jim Parsons, Johnny Galecki, Kaley Cuoco-Sweeting, Simon Helberg and Kunal Nayyar — and with production on the new season set to start in less than a week, on July 30. (The lead trio reportedly are seeking to up their per-episode payday from north of $300K to possibly a cool million.) Even so, there’s believed to be no immediate concern that delivery of the hour-long Sept. 22 premiere will be delayed.

♦ Michael Landes (Save Me) has landed a lead in Members Only (fka The Club), ABC’s upstairs/downstairs look at country club life, Deadline reports. He will play a charming, recently widowed pediatrician and father of two.