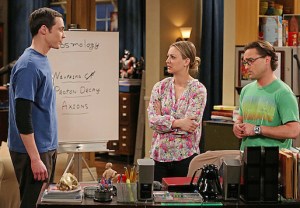 RELATED  Is Big Bang Bride Due for a Big Makeover?

TV’s most watched and highest-rated comedy, CBS’ Big Bang was renewed this spring for not one but three more seasons, though that deal was contingent upon the in-limbo cast members re-signing. Parsons, Galecki and Cuoco-Sweeting negotiate as a trio, and reportedly are aiming to increase their per-episode salary from north of $300,000 (plus a quarter-of-a-point on the back end) to possibly a cool million — though the actors and studio Warner Bros. TV are said to be far apart, with two weeks until showtime.

Helberg and Nayyar currently draw $125 and $75K per episode, respectively, and also are seeking sizable raises. (Later-season additions Melissa Rauch and Mayim Bialik are on different contract cycles, and thus do have deals for the coming season.)

Our sister site Deadline reports that even if the July 30 deadline is missed, even a post-Labor Day production start would afford the show enough time to deliver its hour-long season opener (airing Monday, Sept. 22).