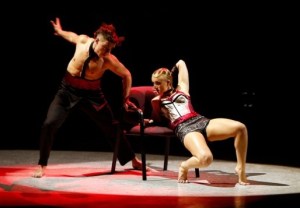 Spolier alert: I’m not going to complain about Nigel Lythgoe taketh-ing away So You Think You Can Dance‘s crucial “fight for your existence” solo round during tonight’s Top 20 performance episode (Part Deux).

Granted, I reserve the right to kvetch, moan and grumble about this questionable omission until at least the end of July, but for now, allow me to focus on the positive and give the executive producer props for giveth-ing us the greatest guest judge in So You Think You Can Dance‘s 11-season history: Misty Copeland.

No, that’s not exactly high praise — not for those of you who remember wilted Canadian lettuce leaf Carly Rae Jepsen’s monosyllabic inanity on the SYTYCD panel last summer. But Copeland, an American Ballet Theatre soloist, brought not only true technical knowledge, but a Ginsu-sharp focus on all 20 contestants’ strengths and weaknesses, from neck and shoulder positioning to facial expressions to emotional intent.

Her barrage of carefully considered constructive criticism couldn’t have come at a better time, considering that few members of the Top 20 — taken out of their comfort zones and paired with partners from different genres — managed to live up to last week’s exhilarating initial live show.

But that was kind of to be expected. And so, without further ado, let’s hand out awards for the night’s 10 routines. (Fair warning: I won’t be providing detailed reviews like I usually do, only because tomorrow morning is Emmy Nominee Announcement Mania — which means early to bed for this recapper):

DANCE OF THE NIGHT
Carly Blaney and Serge Onik (Contemporary) — Gorgeous, emotional and physically demanding. I’m so happy Serge got saved, and so psyched for Carly that she’s emerging as a front-runner.

RUNNER-UP
Jacque LeWarne and Zack Everhart (African Jazz) — The costumes were daft, but the duo sold it like Charlize Theron repping Chanel No. 5.

MOST SURPRISING
Tanisha Belnap and Rudy Abreu (Jazz) — a lot of heretofore unseen heat and maturity for this pair, no?

WORST OF THE NIGHT
Jessica Richens and Nick Garcia (West Coast Swing) — I didn’t care for the routine itself, but Nick once again mugged too hard and didn’t focus on his partner, while poor Jessica just looked overwhelmed throughout.

WORST CHOREOGRAPHY (No Fault of the Dancers)
Malene Ostergaard and Stanley Glover (Broadway) — Can’t we vote off Spencer Liff for delivering a tepid Broadway number that kept two lithe individuals on a leash from start to finish?

MOST OVERPRAISED
Jourdan Epstein and Marcquet Hill (Jazz) — Misty was right that Marcquet completely forgot his face, while Jourdan came across as more lumbering than authoritative. I’m not sold on her skills yet.

MOST OVERPRAISED (RUNNER-UP)
Brooklyn Fullmer and Casey Askew (Argentine Tango) — I lllllllllove me an Argentine Tango, but didn’t feel even a hint of tension between Brooklyn and the tentative-footed Casey. What did I miss about this routine that the judges seemed to adore?

MOST UNDERPRAISED
Emily James and Teddy Coffey (Hip-Hop) — Emily was so effervescent (and flexible!) and Teddy so rubbery that I couldn’t help but wanna boogie down with the two of ’em. Yeah, this wasn’t as dip-it-low as most hip-hop pairings, but Dave Scott seemed to be choreographing to the tall twosome’s strengths, and I loved it.

HARDEST PERFORMANCE TO JUDGE
Bridget Whitman and Emilio Dosal (hip-hop) — Emilio’s a bit of a stealth force in the competition, but Nigel was right, that outfit was distractingly hideous. Bridget, meanwhile, was better than expected, but her face still read a tad pageant-y for what she was being asked to do.

BIGGEST MISMATCH
Valerie Rockey and Ricky Ubeda (contemporary) — Valerie clearly pushed herself to match the incredible Ricky in his own style, but I got no depth of emotion, no sense of longing, in her performance. Ricky continues to paint incredible portraits with his form, but he’s not gonna go all the way if he has to carry Valerie to the finish.

And now, let’s get to results.

ELIMINATED (ANNOUNCED AT THE VERY END OF THE EPISODE)
Malene — Did the judges forget how incredible she was last week???? URGH!
Nick

Phooey! I’d have eliminated Jourdan or Brooklyn before Malene, but Nick was the right man to go.

What did you think? Take our poll below to vote for your three favorite routines, then hit the comments with your thoughts on the performances, the guest judge and eliminations!