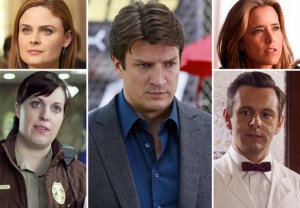 Question: Any word on who will be writing Castle‘s season premiere? —Ben
Ausiello: The good news: Newly coronated showrunner David Amann is penning the Season 7 opener. The even better news: Rob Bowman is directing. And now, the provocative news: Castle will return with a two-parter, and to that end is casting the guest-starring role of “Henry,” a highly intelligent yet unassuming gent who’s deft at blending into a crowd. (A spook-y nemesis of Jackson Hunt’s? 3XK with a new face c/o Dr. Niemann? Discuss.) Also being guest-cast for the premiere are a Hamptons police sergeant, a doctor, a shrink and… a Coast Guard captain?!

Question: Will FX’s Fargo be renewed for a second season? —Jacqui
Ausiello: Yes. A formal pickup is imminent. And, despite talk that Season 2 will feature a brand-new cast, Allison Tolman seems to be leaving the door slightly ajar to a Molly comeback. At the very least, she’s not ruling it out! “I just don’t know,” she tells TVLine. “There’s discussion of there being a second season and it being a brand-new cast, [but] I’m just not sure.” If it turns out we have seen the last of her detective, she admits “saying goodbye to that” will be hard. “Being my first experience making a television show, it was really special. I was very well taken care of. I loved the people that I worked with. It was really a blessing.”

Question: Very much looking forward to Madam Secretary – even more so after your nice review. Any early casting news you can share? —Jeremy
Ausiello: Nothing on the casting front, but I can tell you that the producers behind CBS’ Madam Secretary won’t be shying away from dicey political issues when the drama premieres this fall. TVLine has learned exclusively that the rookie drama — which stars Tea Leoni as a former CIA agent unexpectedly appointed Secretary of the State — is mounting a storyline that will echo the real-life Benghazi imbroglio (a crisis that continues to haunt former SoS Hillary Clinton). The Secretary plot, which will be confined to one fall episode (titled, appropriately, “Another Benghazi”), will find Leoni’s Elizabeth McCord desperately attempting to prevent a Benghazi-like disaster at the U.S. Embassy in Yemen.

Question: Dying to know who sent Dash that e-mail in the Witches of East End premiere! Any hints? —Char
Ausiello: Hold tight, Char, because the big e-mail mystery will be resolved over the next couple of episodes. However, it sounds like the entire East End gang is in for much bigger trouble come Episode 10, when a mysterious woman named Raven Moreau arrives in town to investigate a string of murders. Smart, intense and not at all opposed to having a one-night stand, Ms. Moreau has dedicated her entire life to accomplishing a “secret mission.” In a nutshell, this is bad news for everyone.

Question: Do you know any info about Ryan Murphy’s HBO drama Open? Will it be picked up to series? —Chris
Ausiello: It’s still very much in contention, although we likely won’t get official word on a series order until later this year, and here’s why: Several new scenes are being added to the pilot but, due to actor availability, shooting can’t commence until fall.

Question: Anything on the Devious Maids finale? —Christian
Ausiello: I’ve got two scoops for you, both of them courtesy of co-star Tiffany Hines. “For those people that are Rosie and Spence supporters, we will get to see Rosie and Spence move forward now that Reggie is no longer in the picture.” (That’s Scoop No. 1!) “I believe that we may see another major character’s life hanging in the balance at some point.” (And that’s Scoop No. Deux!)

Question: Do you know what the episode title is for Bones‘ Season 10 premiere? —Gina
Ausiello: I do! Thanks for asking.

Question: Do you have any scoop on Bones? —Cassidy
Ausiello: Here’s something that may interest you: The title of the Season 10 premiere is… “The Conspiracy in the Corpse.” Question: When is Ground Floor returning? —Rose
Ausiello: It looks like November-ish. It also looks like the cast will be expanding. I hear the Bill Lawrence is adding a new female associate to work upstairs at Remington Trust. Her name’s Lindsay, she grew up in the same small town as Briga Heelan’s Jenny, and she’s a genius. She’s also a social misfit. No internal censor. Completely awkward around other human beings. The works.

Question: Is it just me, or is Mistresses setting the table for a possible Joss-Harry romantic entanglement? My first thought is that dating a sister’s ex is the biggest No-No and a line you don’t cross, but this is a glamorous evening soap opera, after all. —Rachel
Ausiello: It’s not just you, Rachel. Executive producers KJ Steinberg and Rina Mimoun admitted in an episode preview we posted Monday that they’re seeing forbidden sparks between the current party-planning partners. “They have a very deep connection that’s only going to get more confusing,” teases Steinberg. But wait — don’t count out Harry’s future with ex-wife Savi, either, the showrunners warn, pointing to the way the couple held hands a little too long as they finalized their divorce papers this week. “We are giving the audience a glimpse of how things were before they tuned in to our very first episode. Harry and Savi were married for a long time and had a deep and good connection before they started the ferility madness and their marriage started to fray,” Steinberg notes. “You’re going to see more of that in the episodes to come.”

Question: Do you have any scoop on Mistresses? —Connie
Ausiello: We also asked Mimoun and Steinberg if they’ve gotten any hints from ABC about a possible Season 3 pickup. “We hear they’re happy with the numbers,” says Steinberg, but as Mimoun notes, the network has “a tendency to wait until very last minute, and in our case, the very last minute would be sometime in September.” With Labor Day a good two months away, the EPs point out that the time is right for a grass-roots fan campaign. “Everyone needs to send panties to Paul Lee — sexy, sexy panties,” suggests Mimoun, chuckling heartily. “That is my dream groundswell.” Adds Steinberg, “I love that idea, I would only request that the panties be unworn.” And that small but important distinction, Mistresses fans, could be the difference between a home run and a total strikeout.

Question: Scoop on Season 2 of Masters of Sex, please! —Alex
Ausiello: I just screened the first two episodes and, be forewarned, there are a lot of loose ends being tied up as well as new seeds being planted, and the result is a somewhat choppy, disjointed narrative. My guess — or, rather, my hope — is that once Bill and Virginia resume their sex study things will get much more focused. On the scoop front, one major character comes thisclose to death, two recurring characters exit and… Greg Grunberg is back!

RELATED Save the Dates: 50+July Premieres and Finales

Question: Anything about The Vampire Diaries Season 6? —Valentina
Ausiello: Devastated over the (apparent) loss of his brother, look for Stefan to turn to a surprising source for comfort.

Question: Do you have any scoop on Arrow? —Trudy
Ausiello: EP Marc Guggenheim just announced the title of the season premiere on Twitter, and I’m repurposing it here for your convenience. The Oct. 8 opener is called… “The Calm.” Oh, and I’m guessing you saw this?