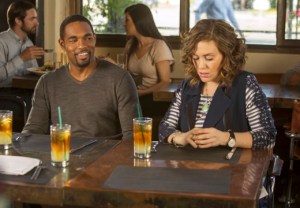 Nope, that wasn’t the echo of July 4th fireworks, but rather, the sound of your head exploding with fresh intel about the latter half of Mistresses‘ second season.

And while there aren’t any literal incendiary devices planned — not that we know of, anyhow — there will be potentially forbidden flirtations, dangerous dalliances and unwelcome appearances by (uh-oh!) undead husbands.

TVLine caught up with executive producers Rina Mimoun and KJ Steinberg to preview the show’s upcoming spate of episodes — specifically, to find out whether Joss-Harry ‘shippers have reason for optimism, why Savi’s been so reluctant to tell Dom about Zack, and how Karen is about to experience the calm before the crazy.

TVLINE | This week’s episode finds Harry (Brett Tucker) considering a move back to Australia. Is this just a fleeting idea in his head, or are you setting the stage for a larger story arc?
Mimoun: The pull to Australia is definitely real. What we find in Harry is there is no anchor for him in L.A. anymore, and other than the business he started with Joss, Harry has hit the wall. Joss is moving forward in her relationship with Scott, and everyone’s life is moving ahead. It would take something significant to bring him back [from the idea of moving].

TVLINE | When you say “something significant,” my brain immediately jumps to the chemistry bubbling up between Harry and his ex-sister-in-law Joss (Jes Macallan), these little glances and bits of dialogue — Joss saying, “I’m all in” for example. Maybe I’m crazy, but it feels like you’re setting the stage for a Joss-Harry romance in a very wicked way.
Steinberg: [Laughs] You’re not crazy — they have a very deep connection that’s only going to get more confusing.
Mimoun: Their connection has completely been a gift to us, because with the two actors involved, even in the first season when their interactions were much more limited, every time they were onscreen together, it was like “Day-um!” There was just something between them that we saw — Jes and Brett have an amazing connection, and the characters play off each other so nicely. We are not trying to lead the witness, but we are allowing them to help tell our story.

TVLINE | So let’s talk about what’s going on with Savi. She’s become fast friends with Zack, the guy with whom she was in a near-fatal car accident last season. And that dude scares me. It always seems like there’s a glimmer in his eye whenever she’s considering doing something stupid or crazy. How bad is he?
Mimoun: [Howls with laughter] Innnnteresting. It depends on what you would consider bad. We as the writers were not privy to the real-life pregnancy of Alyssa Milano until we had already gone down a certain road with the breaking of this story and this character [of Zack]. And something that was important to us was honoring what happened to Savi last year. Knowing this is a woman who almost lost her life, we were looking for a way to incorporate a recklessness, a different side of Savi. When we found out Alyssa was pregnant, it limited our ability somewhat, but Alyssa was totally game to give us whatever she could do. But at a certain point, there’s a big baby in that belly where we can’t shoot the whole thing. [Laughs] The introduction of Zack, though, was a way to show the reckless, potentially dangerous side of Savi. And he is for sure a part of bringing that out in her. TVLINE | Is Savi considering this as a possible romantic connection?
Steinberg: No. What’s happening is she’s lying to herself about what needs these different men fill in her life. The easiest way is to compartmentalize. And she’s not telling Dom because deep down she knows it’s really not cool to have an intimacy with another man. Whether it be an emotional affair or a physical affair, it’s time spent with another man, and in a way it’s speaking to the title of the show — this is another way to be a mistress.

TVLINE | Could Savi’s connection with Zack push Dom toward “Toni Taut and Tan”?
Mimoun: What we really enjoy about Dom — and it’s so much about what Jason George brings to the role — is that he’s never been the bad guy. Harry is obviously complicated and complex and a brooder — but never did anything wrong, per se — in his marriage with Savi. But at the same time, we wanted to create those teams where you could enjoy rooting for Dom even though he’s the guy Savi ruins her marriage over. We got really blessed with Jason to that extent, because he’s so charismatic and wonderful; you can’t hate him that much. [With regard to Zack], Dom is going to engage in the way you hope your mate would, but then of course it doesn’t necessarily always go as well as you’d hope it would go.
Steinberg: But to answer your question in a short sentence: Dom doesn’t take s–t. [Laughs] That’s it. And he won’t take s–t on this one. And it’s going to be interesting and exciting to watch.

TVLINE | I want to shift gears for a second and talk about April’s new boyfriend Daniel. Last week, when he overheard April telling her daughter that she was in love, he looked almost pained. But then, subsequently, he admitted he was in love, too, and it seemed really genuine.
Steinberg: It is genuine. But he has a secret that makes hearing that from her… he’s conflicted. There’s a lot going on with Daniel we don’t yet know about.

TVLINE | Is there any chance April’s undead ex Paul will come back from Florida swamp to which he was banished?
Mimoun: Yes, there is a chance you’ll see the undead ex from the Florida swamp. And I say this to you only because I’m sure by next week, he’ll be all over the promos.
Steinberg: Paul does return. TVLINE | That sounds messy — which is probably a good segue for asking you about Yunjin Kim’s Karen. Is she going to go full Pretty Woman and get paid for her sexual encounters? She seems to be hanging out at hotel bars 24/7! Yet in this week’s episode, we’re introduced to a guy named Ben who seems like he could be more than a hookup.
Steinberg: The Ben situation is going to make Karen open again to having real connections with real people — as herself. And just when that is going well, complications from these dalliances will come back to haunt her.
Mimoun: What you’re watching now with Karen, stay tuned — because it is the gun that just showed up that will inevitably have to go off by the end of the season. We take a detour very quickly which makes you think all is right in the world, but know that it’s Mistresses, so it can’t stay that way.

TVLINE | Will she have any moment as shocking as Elizabeth Gray asking her, “Did you see [my dead husband’s] face when you were screwing my son?”
Mimoun: Yup! Yup! There is! TVLINE | With all these complicated, freaky pairings, I’ve got to ask about Joss’ new boyfriend Scott, whose shoe fetish seems pretty tame by comparison. Are there more cobwebs in his walk-in shoe closet?
Steinberg: He is as nice as he seems — and he’s a really open guy. Which is a nice contrast to Harry, who is a brooding, full-of-secrets kind of guy.
Mimoun: He is wonderful. He is into her. And we will hopefully enjoy watching them fall in love together. [This relationship] was a new way to explore some of the ideas we explored [in Joss’ romance] with Alex last season. Joss is such a rich character and we love following her story — but what does a stable and safe relationship do to a hot mess like her? She’s the youngest of our women, and she is not quite where Savi is. So it’s kind of fun to screw with her.