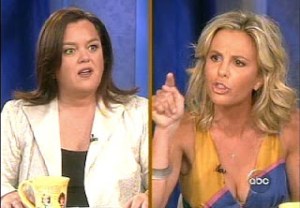 It appears Elisabeth Hasselbeck has been holding on to some intense anger towards her onetime View rival Rosie O’Donnell.

Addressing buzz that O’Donnell is thisclose to returning to The View, a vacationing Hasselbeck phoned her current colleagues at Fox & Friends on Wednesday morning to weigh in on the development. Spoiler Alert: She’s fit to be tied!

Hasselbeck went on to allege that O’Donnell told her she “produced” the recent View reunion show that aired during Barbara Walters’ farewell week, claiming that she marched around the set “with a lot of control.”

The rambling, borderline-embarrassing tirade comes as reports say O’Donnell is finalizing a seven-figure deal to reclaim her old perch at ABC’s struggling chattiest.