Can a single guest judge — bland as wilted leaf of iceberg lettuce, unqualified as a 2-year-old gleefully clutching the wheel of an 18-wheeler — ruin an entire two-hour telecast of an Emmy-nominated reality competition series? Maybe not entirely.

But if this week’s installment of So You Think You Can Dance was an Olympic swimmer, then Canadian songbird Carly Rae Jepsen was like a lead weight around each leg, her every mumbled utterance, her repeated (and meaningless) recitation of the word “incredible” leaving the telecast sputtering and gasping for a life line.

Honestly, Christina Applegate and Jesse Tyler Ferguson are great, but it’s time to get some folks with actual dance backgrounds, functional internal thesauruses and some hint of life behind the eyes to fill out the third slot at the table for the next few weeks. Come on, Uncle Nigel, surely you’ve got Mia Michaels and Debbie Allen in your cellphone contact list, no?

But enough of my raging against poor Carly — even if she deserves it for offering meek support of the hideous low-crotch genie pants that robbed us of Alan’s standard operating sexiness. Let’s cut to the Top 16 results and a rundown of the week’s routines:

SENT IMMEDIATELY TO SAFETY
Jenna (though I’m not sure why, exactly)

DANCING FOR THEIR LIVES
Mariah: Pretty much the same krump routine we saw the last time she had a solo
Makenzie: A birdlike routine to “Claire de Lune”
Alan: A stunning display of brute-force ballroom, complete with lightning-fast spins, crazy-intense posing and a good 10 seconds of cape twirling (INCREDIBLE!)
BluPrint: Some decent animation work that didn’t seem to incorporate last week’s note about his dead face
Curtis: Lighthearted tapping that didn’t make an enormous impression

ELIMINATED AT THE END OF THE SHOW
Mariah
BluPrint 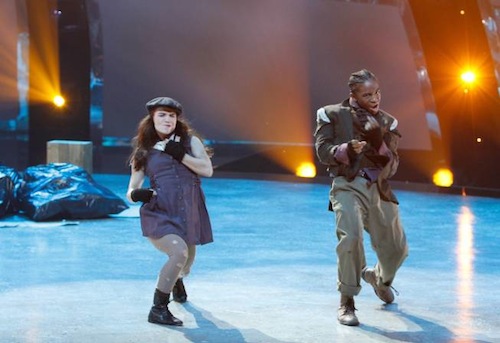