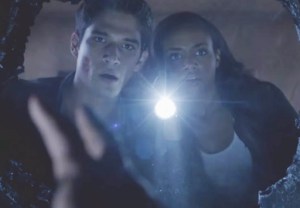 Only on Teen Wolf could a simple-yet-sexy rescue mission to Mexico lead to the most unpredictable (little) twist in werewolf TV history.

The first half of Monday’s Season 4 premiere found Stiles and Lydia playing the world’s most hectic game of Let’s Make a Deal with the head of the Calaveras. (I’ll go out on a limb and say her name is Araya. That’s what IMDb says, so I hereby relinquish myself of all blame.) The negotiation for Derek’s safe return began in Stiles and Lydia’s favor – there was plenty of sass and eyebrow action from both parties, which was much appreciated – but one false move turned Scott’s entire pack into the Calaveras’ unwitting prisoners. A very-not-chill torture session ensued, forcing Kira to electrocute Scott and prompting Malia to plant a big coyote kiss on Stiles. (Personally, I think they’re dirty bathroom kiss was way hotter than their dirty basement kiss.) Eventually, Scott screamed out the name of Derek’s real captor (Kate!), but that only led to more confusion. “Isn’t she dead?” they asked themselves, proving that none of them bothered to watch the final scene of last season’s finale. (Kids these days!)

Braeden and her sweet set of wheels returned as the pack’s tour guide, leading them to “La Iglesia,” the God-forsaken ruins where Derek’s body was being held. And because this is Teen Wolf, Braeden also used the excursion as an opportunity to troll Scott and Kira’s love life. (“If you die down here, will you regret not kissing her?” she asked out of nowhere.) Of course, romance quickly became the last thing on everyone’s mind once Derek’s body was discovered in the depths of the tomb…

Below, executive producer Jeff Davis answers our burning questions from the season premiere, including how long Derek Jr. will be around and what Stiles and Malia’s kiss really meant: 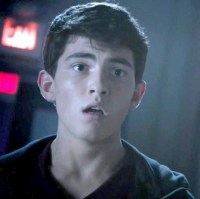 THE CURIOUS CASE OF DEREK HALE | You probably weren’t expecting Derek to re-emerge from Kate’s tomb looking all bite-sized, were you? Well, fear not, because the former Alpha’s downsizing is only temporary. “Episode 2 is all about, ‘How do we get him back to normal?'” Davis explains. “The mystery of his backstory, what he was up to as a teenager, is always open for debate. And we like Ian Nelson so much, so we were trying to think of a way to bring him back and have some fun. [Laughs] I think people are going to be surprised by what happens in Episode 2.”

STALIA’S FIRST KISS (OF THE SEASON) | Stiles and Malia’s kiss gave us our first peek into their Season 4 relationship, but what was behind that kiss? Allow Davis to explain: “It’s because she remembers the calming kiss that they had at Eichen House, and it’s also because she likes him. He tells her, ‘Look at me, concentrate on my eyes,’ but what she finds herself concentrating on are his lips. For Malia, this is the first guy she’s made a connection with. You could say she made many connections, possibly, in the woods, but we don’t really know what happened to her in the nine years she was a were-coyote. This is the first real human connection she’s made.” LOOK WHO’S BACK | Monday’s premiere also saw the return of Braeden, who’s “going to be a big fighter this year, someone who’s always on the moral fence,” Davis says. As for whether or not she’ll end up as a love interest for Derek — they were allegedly seen kissing in one of the trailers released by MTV, pictured right — Davis hints, “That could be possible.” (Which is a shame, because we all know how poorly Derek’s relationships end.)

TEEN WOLF: THE NEW CLASS | MTV has been touting its next generation of Teen Wolf stars — Dylan Sprayberry, Mason Dye, etc. — for months, but don’t expect to really meet them until Episode 3. “Liam, Garrett and Mason figure into the plot quite significantly,” Davis says. “They’re not just teenagers on this show.” (One of those three becomes Scott’s first beta, while the other rookies will remain human… for now.)

Teen Wolf fans, what did you think of the season premiere? Are you relieved that Derek will be back in full form soon? And how do you feel about Stiles and Malia’s connection, now that you’ve gotten a chance to see it? Drop a comment with your full review below.