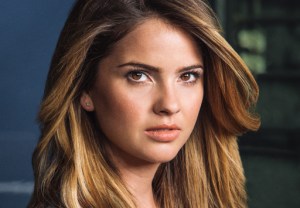 Malia Tate is so much more than just the new girl in the pack on Teen Wolf. She’s a feisty, complicated, emotionally vulnerable character with an unbreakable bond with Stiles — and Shelley Hennig knows she has her work cut out for her.

Below, Hennig explains Malia and Stiles’ relationship to TVLine (“She’s more likely to punch him; that’s her way of showing love”) and outlines the newbie’s place in Scott’s pack. So before you watch tonight’s Season 4 premiere (MTV, 10/9c), take a quick trip inside the mind of everyone’s soon-to-be-favorite coyote. (No offense, Mr. Wile E.)

TVLINE | Many fans remember you from your Secret Circle days. What can you say about transitioning from a glamorous witch to a down-and-dirty coyote?
Personally, in real life, I’m a little more down-and-dirty than I am glamorous. [Laughs] It’s been an easy transition, one that has felt very comfortable and natural for me, which I am forever grateful for. I feel like I know the character really well, and I really enjoy it. TVLINE | And the teeth and the claws aren’t giving you any trouble?
When you have the teeth in, you don’t feel as dumb when you’re making those growling noises. It feels like, “OK, I have something that’s making me look cooler while I do this.” So they’re sort of a necessity, in my opinion, as well as having the claws. But I’m also one of those people who can’t stand getting manicures, because you can’t use your hands for 40 minutes; and when you have these claws on, it’s impossible to use the bathroom, use your phone or flip through your script.

TVLINE | But Malia is more than just a coyote-person. She’s pretty complex, having lived in the wild for most of her childhood. How do those missing years affect her day-to-day life?
Malia is definitely learning what vulnerability feels like, because on the coyote side, I’m sure that did not exist. So being a human, especially a pubescent teenager, she’s experiencing a lot of things other humans are experiencing, but it’s more challenging for her because she hasn’t been in school for 10 years. She’s a little behind in her classes, and that’s where Lydia comes in; she’s really smart and agrees to help her. As Shelley, I face new things in my life every day, but nothing as new as Malia is facing, so I’m really enjoying playing that. TVLINE | I’m enjoying seeing Malia form bonds with Lydia and Kira. What can you say about their friendships?
She has a very physical relationship with Kira. … Wait, that sounded wrong. [Laughs] I mean they fight together — the monsters, if you will. The Berserkers. What’s also great about that pair is that Kira is so afraid to stir the pot, whereas Malia doesn’t have a filter. So she can feel what Kira’s thinking and just say it outright. Sometimes it comes off a little abrasive, but Malia was a wild animal for 10 years, and the pack knows that. Her friends are also getting used to her personality, and Stiles is really there for her to remind the pack she’s trying. She’s loyal, but the way she says things isn’t exactly how she means them.

TVLINE | I believe I just heard the magic word, “Stiles.” What do you enjoy about his relationship with Malia?
I love how unique their relationship is. First of all, coyotes are very loyal and faithful animals. When they find their [mate], they mate for life. Malia has found this in Stiles, and she’s not going anywhere; she is 100 percent there for him. Whatever he asks her to do, she will do. She trusts him. What I also love about their relationship is that it’s something I haven’t seen on TV. Malia’s very aggressive. She’ll physically grab him, and that means she loves him, as opposed to brushing his face with her hands. She’s more likely to punch him; that’s her way of showing love. It’s like Malia’s the big spoon, and Stiles is the little spoon. Dylan [O’Brien] has been so gracious as an actor to accept that and not be like, ‘No, I’m a man.’ He’s so fun to work with because he’s willing to shrink around her.

TVLINE | This show, and Stiles specifically, is a hot bed for shipping. What kind of early feedback have you gotten on Twitter?
I’ve only seen good things. Friends will send me things because I’m not really great with social media. I do know that we’re called “Stalia,” which I learned on Wolf Watch. Maybe I’ve only heard great things because it’s a third party telling me, I don’t know. [Laughs] Personally, I don’t look into that too much. I have to enjoy and like “Stalia” in order to do it justice on camera. TVLINE | And it can’t be easy coming into a show that’s already so established.
Actually, I replaced someone on Days of our Lives once, and the fans hated me. She was a redhead, I was a brunette, they went nuts. Even at fan events, they were rude to me. [Laughs] But they got used to it, and they accepted it eventually. I hope Teen Wolf fans accept me, because I’m having a really great time playing Malia.

TVLINE | And how is she going to surprise us?
That’s a really good question. The first thing that comes to mind is that she’s loyal and genuine, and even though she’s new, she’s fully devoted to protecting the pack and Beacon Hills. I also hope they find her funny! She really is.

Teen Wolf fans, are you ready to welcome Malia with open arms? Drop a comment with your hopes for Season 4 — including all things “Stalia” — below.