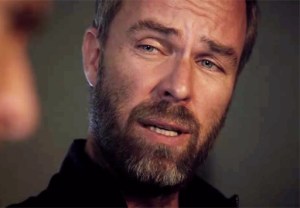 No one is in a particularly good place when Teen Wolf‘s fourth season premieres June 23 (10/9c, MTV), but there’s no doubt that Chris Argent is in the downest of dumps. I mean, just look at that beard!

“The beard came about during hiatus,” JR Bourne tells TVLine. “I’d had some meetings about some other things, and I kept it growing. When I got back to the Teen Wolf set, everybody loved it, and [executive producer Jeff Davis] was like, ‘I think this is a great look. It makes sense. He’s off.’ It’s sort of a funny-but-easy way to show, physically, his state.”

(Translation: Argent has no one to shave for. Sad.)

Below, Bourne previews the biggest non-beard developments of Season 4, including were-jaguar Kate’s nasty plans for Scott’s pack, as well as the identity of the mysterious — not to mention freaky and mouthless — Benefactor.

TVLINE | So… Argent’s daughter and wife are dead, and he thinks his sister is dead. What’s his mental state going into Season 4?
He is ridiculously messed up. He’s definitely struggling with returning to Beacon Hills. He even mentioned in Season 3 how everything there had decimated his family, and that was before his daughter died. He’s battling with a lot of inner vengeance, and he’s trying to figure out who he has left, who he cares about — which is, ironically enough, some of the werewolves.

TVLINE | It looks like Argent will be taking on a more fatherly role with Scott, too. Is that accurate?
Yes, and I think that’s always sort of been there. But with his real father being in the picture now, I don’t think Argent is going to step too much on those toes. I think he’ll always desire to be there for Scott, because he’s proven himself over and over to Argent. Basically, Argent is in a state of “What now?” and “Why bother coming back?” But he does.

TVLINE | Where is he now, France? I can’t keep track of Argent. He’s basically Carmen Sandiego at this point.
Oh yes. He and Isaac went to France to get rid of the Nogitsune, and he returns when he finds out his sister is alive. In fact, it’s possible he knew about her before he left, but he comes back knowing full well that she’s there. He also comes back because Scott is calling out to him. TVLINE | Does Argent also know she’s a were-jaguar?
[Laughs] Yeah, she’s a were-jaguar, all right. To be honest, his return is to try to set some sort of balance with Scott and even with Derek. And given Kate’s plans, what she’s about to do, I think he needs to take care of that. There’s also a personal a vendetta. He’s in a state of not knowing what to expect, but knowing that she’ll probably be a focus for him.

TVLINE | When Crystal Reed told everyone she was leaving last season, were you worried that Argent would also be written off? How was that for you?
I understood why she wanted to leave, I accepted that. Jeff [Davis] has always wanted everybody to be happy there. If you want to go off and do more, he will support that. He’ll allow it. I felt confident that Jeff wasn’t going to get rid of Argent, because I knew there’d be unfinished business for him.

TVLINE | I know Jill Wagner has stayed in the Teen Wolf family, but when did you first find out she’d be rejoining the show?
Oh gosh, I think I caught wind sometime during 3B that she’d be back. We heard the rumors, and we were excited. We’re all such good friends, and we knew that whatever capacity she was coming back in, she’d be trouble — which is always fun.

TVLINE | Plus, bringing back someone from Season 1 gives it a nice full-circle feel, I’d imagine.
Oh God, yes. And there’s so much history between her and I. We weren’t even on good terms when she was alive, and we all know her history; she loves to go against the code. That’s definitely something Argent is aware of when he comes back. TVLINE | Will he also split his time with this creepy “Benefactor” we keep hearing about?
Well, that definitely is the focus for the group. I’ve come back to not only deal with my own demons, but to help the kids figure out who the Benefactor is. There’s a lot of us that are potentially the Benefactor, so it’ll be interesting watching us figure that out. And having Kate involved pushes Argent’s agenda to set things straight in Beacon Hills, which I don’t think is ever going to happen. [Laughs]

TVLINE | I’m not holding my breath.
Don’t ever plan to move to Beacon Hills. I’m beginning to think we can’t move out, like we’re trapped there or something.

Teen Wolf fans, any early guesses about the Benefactor? Drop a comment with your Season 4 hopes/fears/theories below.