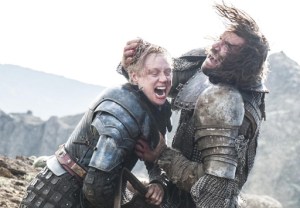 THE EPISODE | “The Children“

THE PERFORMANCE | Physical acting rarely gets its due come awards season, but Rory McCann and Gwendoline Christie’s stunningly brutal, gasp-inducing battle scene during Game of Thrones‘ Season 4 finale was one of the finest examples of the form in recent TV history — absolutely too epic to ignore.

RELATED Game of Thrones: The Story Behind 4 Finale Deaths and a ‘Missing’ Lady

The scene began with Christie’s Brienne of Tarth accidentally stumbling upon Arya Stark, the orphaned child she’d vowed long ago to track down and protect, along with Arya’s captor-turned-reluctant-guardian Sandor “The Hound” Clegane (played by McCann). Every word of their conversation vibrated with anticipation of the violence that was about to erupt: “There’s no safety, you dumb bitch: If you don’t know that by now, you’re the wrong one to look over her,” growled The Hound, after listing all of Arya’s relatives who’d met horrifying fates. “And that’s what you’re doing — watching over her?” Brienne replied, an incredulous grin creeping over her face. “Aye, that’s what I’m doing,” Clegane sniffed back, betraying the fact that his concern for Arya was no longer solely about a cash reward.

Thus, we had two beloved characters, locking eyes and drawing their swords, both believing they were on the side of right. And the ensuing two and a half minutes, with Brienne and The Hound’s lives hanging in the balance, allowed Christie and McCann to serve up a scene as horrific, suspenseful and thrilling as any in Game of Thrones history. Swords clanged. Fists connected. Brienne cornered her rival and told him she didn’t want to kill him, but he grabbed the end of her sword, the Valerian steel ripping into his hands, telling her “I’m not a knight” and letting us know his kill-or-be-killed intent. From there, the brutality began to exponentially multiply: The Hound preparing to snap Brienne’s neck; her boot connecting with his tenders; The Hound gaining the upper hand with a series of vicious kicks and then pinning his rival to the ground; Brienne countering by biting off a chunk of Clegane’s ear, then rising and pummeling him with a rock (letting out the most primal of screams and spitting out his flesh in the process). Finally, as the duo teetered at the edge of a precipice, it was The Hound who fell backwards to his presumable doom, and the audience who was finally able to let out a collective exhale.

Later, McCann proved just as devastating — although much more quietly so — first asking, then taunting and finally begging Arya to use her tiny sword and put him out of his misery. When his ward instead made off with his coin purse and left him to waste away, the bloodied, muddied warrior suffered the worst defeat of all. If The Hound ultimately meets his maker at the bottom of that cliff, at least McCann made his gruff, often unfeeling character’s final moments on the show unforgettable — and a little bit heartbreaking. HONORABLE MENTION | Fox’s 24 over the years has given us all modus of POTUS, from the iconic David Palmer to the weasely Charles Logan to that bland Wayne guy. How will history remember William Devane’s James Heller? As a hero who chose “the right way” to go — in the name of saving lives. In his final hour on Live Another Day, Devane exhibited all his tools, first with a convincing roar that even Jack Bauer couldn’t argue with: “I know it’s not just about me! It’s about those dead bodies in the hospital parking lot!… Face it son, you and I are the only chance they have.” From there, he was given moments amusing (imagining the damage Jack could have done all these years as a surgeon), tender (stealthily saying farewell to unwitting daughter Audrey) and, ultimately, dutiful. “We’re outta time,” he told Jack before marching onto the Wembley field, ready to find himself squarely on the business end of a drone missile. Devane in every sense of the word went out with a bang. HONORABLE MENTION | All season long, Jessica St. Clair and Lennon Parham have been making us giggle uncontrollably as best friends Emma and Maggie on USA’s criminally underrated Playing House. In the Season 1 finale, though, as Maggie delivered her baby and Jessica’s unrequited crush Mark (Keegan-Michael Key) decided to put some distance between them, St. Clair proved she’s equally adept at making us reach for the Kleenex. The delivery scene in particular — where Emma steeled herself, then reminded her pal of the moment where they got through Maggie’s parents’ funeral together — proved a truly touching reminder of the characters’ deep connection. Here’s hoping a Season 2 renewal — and the promise of more authentic female friendship on our screens — is imminent.