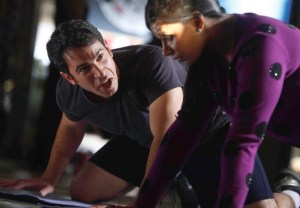 When it comes to this year’s Outstanding Lead Actor in a Comedy race, we’re paging Chris Messina to the winner’s podium — stat.

And this season, when the two lead docs finally figured out how they felt about each other, Messina got to play the Harry to Kaling’s Sally, the Mr. Darcy to her Elizabeth Bennet, the Sam Baldwin to her Annie Reed… not that Dr. C knows who any of those people are.

Over the course of two seasons, Messina says, his cranky alter ego has mellowed just enough to make us root for him in the quest for Mindy’s heart. “We learned in the first season, it’s only so funny to watch a guy be grumpy and cool and above everything. There’s only so much mileage in that.”

However, “The writers were smart enough to go, ‘Danny can be grumpy and above things, but he’s kind of like [The Pink Panther‘s] Inspector Clouseau:” Just when he thinks he’s cool, “he falls in a manhole,” the actor says, laughing.

We chatted with the funky brewmaster — and  TVLine dream Emmy nominee — himself to get the scoop on when Danny’s romantic revelation took place, whose buff bod was featured in Christina’s photo exhibit and where Dr. C’s obsession with Mindy’s bottom line got its start.

TVLINE | When the show came back from hiatus and Danny and Mindy started heating up, I know you ran into fans who had strong feelings about what was going on. Were they pro-Danny?
They seemed to be kind of mad at Danny, especially after that episode where he broke up with her. They were angry with him – which was cool. It was fun because it showed that people care. We film on the lot at Universal, and you’re kind of in a bubble. I try not to read my stuff [online], because when you read something nice – like you guys saying I would be a good dream nominee, which is so nice of you guys to do – then you read somebody else saying if this guy gets nominated… [Laughs] We went to New York to film stuff for the last episode, and there, people were very vocal. They were telling me they were mad at me and to get my s—t together.

TVLINE | It’s kind of crazy to think Mindy and Danny are together now. In the pilot, they seemed to really not like each other.
Yeah. They were brutal to each other. TVLINE | What do you think was the moment Danny realized she might be the one?
That’s a good question. I don’t know if there was one [moment]. I think it was a combination of many. When she pretended to be his girlfriend, definitely. Perhaps what Mindy’s character brings out in Danny and how she makes him see the world, even though he grudgingly bumps up against a lot of the way she lives her life and what she says, it’s so different from his outlook that it’s somewhat refreshing and new and exciting for him. He likes the person he is around her. Also, Mindy’s character has grown in two seasons. He’s watched that. She still is full of a lot of nonsense that he disagrees with or doesn’t understand, but she’s taken steps to take care of herself and even voices her opinion with Danny, saying, “You can’t do this to me” and “You can’t treat me like this” and standing up for herself. Watching her grow as a woman, probably, was really attractive.

RELATED | Exclusive: The Mindy Project Losing a Series Regular Ahead of Season 3

TVLINE | The Secret Santa dance to Aaliyah’s music: If I said “Do it right now,” could you?
Not that well. It would take me a couple tries. That would disappoint you. That dance was so well choreographed… It would take me about 10 to 15 attempts at it, and then I could get it down.

TVLINE | Christina’s photo exhibition – how many of those photos were you actually involved in?
I was involved in a lot of them. It was a lot! I think some of those also were carried over from when that was first introduced, in the first season. It was in the first season that Chloe [Sevigny] takes pictures of me and puts them up in my apartment. That was a big photo shoot, and there was another photo shoot in the second season. So there’s a lot of silly pictures of me doing stupid poses with my clothes off somewhere, in somebody’s library on their computer.

TVLINE | Are they around the set? Those were some pretty big prints.
I mean, thankfully, I don’t get to see them. But the day we shot that stuff, you walk in and there’s a hundred extras and there’s your big face, naked and blown up, as big as can be. It’s a little bit odd.

TVLINE | Do you ever worry that you’re playing Danny a little too mean, or maybe not curmudgeonly enough? It’s a fine line.
Yeah. I don’t think too mean. I’ve thought the opposite, like maybe I was getting too soft because there was a lot of stuff that was full of love, which was so fun to play and a nice side to see, but I wanted to make sure that the character that we started wasn’t just thrown out the window. It’s an interesting balance to try to be honest with the character and make sure that he’s not so grumpy that nobody wants to watch him or listen to him.

TVLINE | I did notice on a couple of significant Mindy-Danny kisses, you definitely went for the ass-grab.
[Laughs]

TVLINE | I’m wondering if that was a direction or if that came from you…
It wasn’t a direction. Danny mentioned in an episode to his buddy Stevie, I think Stevie said he grabbed Mindy’s ass and I said, “That’s my move. You stole my move.” I just remembered that was something that Danny was proud of, so we incorporated it in. I didn’t even know if anyone was even going to notice. Then I was told that it got a lot of attention, and we did it again in the [season finale].

TVLINE | Did Mindy [Kaling] know it was coming?
I don’t think she did. But it was a wide shot, and usually in wide shots, it’s good to be more physical. The subtle movements don’t usually play as well. So I thought, what would play here? And I thought an ass-grab would work.

TVLINE | It was all for the craft, then?
[Laughs] It always is.