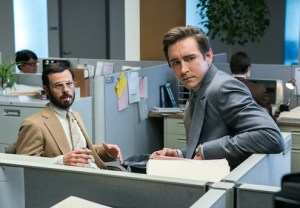 The early days of personal computing, though important for their contribution to our increasingly technology-filled lives, certainly aren’t the sexiest possible subject for a cable drama to tackle.

All that code talk! People staring into screens! Green letters on black backgrounds! Can such a cerebral topic – which serves as the backbone of AMC’s newest series, Halt and Catch Fire — make for compelling TV?

I’ve got some thoughts on the matter, but first, a brief recap of Sunday’s premiere:

It’s the 1980s, and Joe MacMillan (a much-missed Lee Pace, of Pushing Daisies fame) has recently left a job at IBM with a kinda-illegal dream: to take the one, tiny part of the PC that’s proprietary to his former employer and reverse-engineer it, eventually making his own and giving the tech giant some competition on the home-computer front.

MacMillan is a slick, Members Only type of guy who lands a new gig at Texas’ Cardiff Electric without ever showing the boss his resumé. Soon, he’s trolling the company for an engineer to help with the sneaky side project; he lights upon Gordon Clark (Scoot McNairy, Bones), who’s so depressed after the failure of his own passion project that he numbly stumbles through days at work and nights with his wife (Kerry Bishé, Scrubs) and daughters.

Soon, the two men are forking over cash for an IBM PC, which they systematically dismantle and map over a long weekend in Clark’s garage. Once the pair has the IBM code in hand, they enlist punky college student Cameron Howe (Mackenzie Davis, That Awkward Moment) – whom Joe “scouted” with abandon in a bar’s back room —  to help make the magic happen.

Two slight snags: IBM isn’t psyched that Joe, who just up and left his job one day, is working for another firm… and the tech giant is ready to throw down in a courtroom over his little reverse-engineering project. Through a complicated series of legal maneuvers, Cardiff Electric realizes that Joe has forced its hand: The Texas company must move forward with a plan to build a PC or else lose absolutely everything to IBM, whose army of lawyers arrive as the episode comes to a close.

Oh, and that title? “Halt and Catch Fire” is a computer-code joke, referring to the command that causes a computer’s central processing unit to stop working (but not, y’know, actually burst into flame).

I suspect those who are very interested in the inner workings of PCs will find a lot to nerd-out about in Halt and Catch Fire‘s premiere episode; for viewers like me, who like the magic box to just work at the press of a button, the plot sometimes lags.

I was pleasantly surprised by the way Mrs. Howe comes around to support her husband’s dream so quickly; I’m also looking forward to see how Joe, Cameron and Mackenzie clash as they pursue tech notoriety. Plus, much like in FX’s The Americans, the drama’s ’80s soundtrack kinda rocks. In short: I haven’t yet reached the blue screen of death on Halt and Catch Fire, but I’m keping tech support on speed dial nonetheless.

But what did you think of Halt and Catch Fire? Grade the episode via our poll, then hit the comments to back up (get it?) your choice!