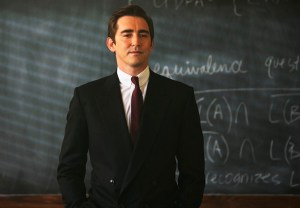 The hero of AMC’s newest series, Halt and Catch Fire (premiering this Sunday at 10/9c), is a fictional visionary at the dawn of the computer era — and possibly a bit of a sociopath, too.

Lee Pace (Pushing Daisies) plays Joe MacMillan, a former IBM sales executive who weasels his way into a job at Cardiff Electric, part of the burgeoning midwestern tech industry. He then recruits their engineer, Gordon Clark (played by Argo‘s Scoot McNairy), as well as rebellious student/programmer Cameron Howe (That Awkward Moment‘s Mackenzie Davis), to reverse-engineer his former employer’s computer. And he’ll stop at nothing and spare no one’s feelings to accomplish his goal because “there’s a bigger purpose,” says Pace. “Now some might say that’s sociopathic,” but the label may not stick if Joe succeeds at revolutionizing the technology.

RELATED | Halt and Catch Fire Makes Its Debut on Tumblr

Below, Pace defends his “a–hole” character and previews his rocky romance with Cameron. He also reveals his hopes for a Pushing Daisies Broadway musical and the role he’d like to play on Hannibal.

TVLINE | This is your first regular TV series since Pushing Daisies, which was a decidedly different show. What has this experience been like for you?
The piece maker could not be more different than the pie maker in a thousand, thousand ways. Everything about it is different — different network, different creators, different love story, different skill set. [Laughs] I hear Joe criticized as kind of an a–hole. But he doesn’t kill people. TVLINE | I find it interesting that you said love story because in the pilot, it doesn’t seem like the most romantic connection between Joe and Cameron. How does that relationship develop?
I don’t want to say too much. I probably shouldn’t have even said love story. But she’s irresistible to him, absolutely irresistible. Meeting her in that classroom is the reason he wants to make that computer. He wants to make the tool — and put it into her hands — that will change the world, because she needs it. If I can take this technology out of corporate America and put it into that girl’s hands, we live in a different time. That’s what Joe means [when he says], “It’s not about the thing. It’s the thing that gets us to the thing.” It’s culture that interests him.

TVLINE | This is a fictional show, but you’re talking about an object that is very real and a period in history that’s very real. How much do real events play into the first season, like the rise of Apple?
Joe’s aware of Steve Jobs. He knows that he’s working on something very cool on the West coast, and he wants to beat him. Joe believes in himself, believes that he has something to offer, this technology. … Sixty companies were trying to develop computers [at the time] with much more resources than Cardiff Electric. But Joe knows that it doesn’t matter. IBM’s resources, the leagues of white dudes in suits and corporate money and corporate interests – who cares? Who cares about any of that stuff? All we have to do is make the most awesome machine that we could make. And if we succeeded at that, people will want it. Then we’re in. And then we can build the next thing and the next thing and the next thing. Then we’re bringing about the millennium. That’s innovation. That’s the whole spirit that drives Joe MacMillan. And when you know that you’ve got millions of people hungry for this technology that’s going to change their lives, why would I care if Gordon’s feelings are hurt? Why would I care if [Cardiff Electric boss] Bosworth is a little ticked off that I had taken over his company? [Laughs] There’s a bigger purpose. Now, some might say that’s sociopathic, but it all depends on whether or not Joe wins. If he wins, if he succeeds in what he set out to do, then he’s a risk-taker. He’s a pioneer. He’s someone who overcomes obstacles. If he fails, he’s an a–hole.

TVLINE | There’s sort of a slick Don Draper salesman quality to him.
It’s a mask. When I say in the pilot episode, “I’m done doing business like that,” he means it. But that way of doing business is effective. So if I have to wear those shoes to get in the door and then start running this thing the way I want to run it, I’d better wear that mask for a while. But you tell me if you think he’s like Don Draper after Episode 3.

TVLINE | He’s a much darker character than Ned the pie maker. Was that really appealing to you to shed that image?
Like I said, he doesn’t kill people. It’s a different character. I’m so fortunate to have a diverse list of characters put in front of me. Gosh, whenever I’d get one of them, too, I’d think, “Oh, he’s going to be nothing like me.” The very first movie I did was called Soldier’s Girl. The transformation was so great in it that I thought, “I’m never going to recognize myself in that.” But I watch it and I do see myself. I see myself fall in love. I see so much more of myself than I ever expected to see. With Ned, who knows if it’s that the character imprints on you or if it draws things out of you that you didn’t know were there. But yes, I absolutely feel like Ned is me. And after doing a season of this show, I feel like, in a way, I have never been more revealed in a character. I never would have guessed that from reading the pilot. I never would have thought that this man would be so close to who I am, and it really, really turned out to be that. There were times that I thought those writers were in my head and I was like, “Guys, what’s going on? Are you reading my sleepless nights?” [Laughs] 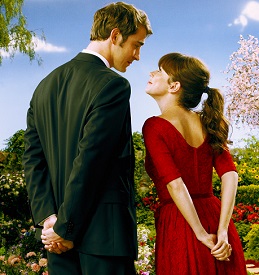 TVLINE | People really connected with Pushing Daisies. They still love it. What do you think it is about the enduring appeal of that show?
I don’t know. I remember doing [press] for Pushing Daisies, launching the show, and trying to explain what it was about. “Ned can touch dead people back to life, and if they lived for longer than a minute, then someone else would die. And if I touched them for a second time, then they would die. And I touch my child sweetheart back to life, then I can never touch her again.” It’s a such a only-out-of-the-mind-of-Bryan-Fuller kind of show. It’s one of those magical, odd things. I don’t know what it is. But I do know that I fell in love with Anna Friel, absolutely fell in love with her. I saw her in New York recently because she’s doing a new show this season [NBC’s Odyssey]. We had such high hopes for [Pushing Daisies]. We’re proud of it, made something special. And it means so much to me that people, even if they didn’t discover it at the time, are starting to discover it now because we worked hard on it.

TVLINE | [Creator] Bryan Fuller has talked about wanting to do a Pushing Daisies Broadway musical. If that happens, would you like to be involved?
Yeah, totally! I’ve always wanted to do a musical. Always been kind of curious about that. I can’t let my career end without doing a musical. So I would, yeah. I’d totally be game for that. It sounds actually really fun. It’d be fun to get the band back together.

TVLINE | It seems like the perfect venue for that sort of story, too.
Oh, we had so many musical episodes, so many songs in the show. It could be perfect. Can’t you just imagine The Pie Hole on stage? Perfect, right?

TVLINE | Has Bryan actually talked to you about it? Or is this just fans being wishful?
Might be a little bit of that. But Bryan feels as strongly about this show as I do, obviously. We always talked about different ways to get back with Ned because it ended so abruptly. It was unsatisfying for us, and it would be great to conclude it.

TVLINE | What about a guest spot on Hannibal?
I would love to. I love that show. What an incredibly eclectic series of shows Bryan Fuller has made. What he’s doing is so cool with my beloved Caroline Dhavernas, my little sister [on Wonderfalls]. So I would love to play someone twisted and dark on Hannibal.

TVLINE | Put Joe to shame, do something really dark and sociopathic.
Well, you just wait! You wait and see what he gets up to this season, Joe. He’s complicated. Very, very, very complicated.