Though it’s been months since Drs. Lahiri and Castellano had one heck of a smooch in an airplane galley, absolutely no time has passed on The Mindy Project — and so back to the  friendly skies we go in Tuesday’s double episode midseason premiere.

But, particularly in light of this disappointing season of New Girl, can the Fox comedy withstand its antagonistic lead characters hooking up? We’re sure you have thoughts regarding the hour’s ‘shiptastic goings-on and what it means for the future of the series; we’ll get to them in less time than it takes Mindy’s tush to set a church ablaze. First, though, a quick recap of what happened during the episodes.

YOU ARE NOW FREE TO MOVE ABOUT YOUR CO-WORKER | The evening’s first episode, “French Me, You Idiot,” picks up just after the kiss, when Danny’s not sure that Mindy is as into his gesture as he previously thought. His worry is banished, though, when she pulls him into the nearby bathroom and they go at it like teenagers. (Well, maybe like teenagers worried about mussing an expensive sweater.) But this is The Mindy Project, so the rom-com moment devolves as Danny’s arm gets stuck in the garbage chute and Mindy’s hair is accidentally caught in a ceaselessly flushing toilet.

Somehow, none of that kills the mood, and the pair are still holding hands and smiling goofily at each other as they ride the elevator to her apartment. But when the doors slide open, Cliff is there (with Morgan and a mariachi band playing “In Your Eyes”): Her eloquent email — which, you’ll recall, Danny actually wrote — convinced Cliff that they’re meant to be together, and he wants her back.

GRIEF (ABSENCE OF) SEX | Danny doesn’t want to go any further with Mindy until she and Cliff are through, but her attempts both to ditch the lawyer and to get him to dump her are unsuccessful… and are complicated when he gets a call that his “super old” grandmother has died.

At the funeral, Mindy delivers a eulogy that includes the words “irregardless,” “sadliness” and “Kendrick Lamar,” then she and Danny accidentally knock a lit candle into a tapestry while making out during the service. While the fire department is cleaning up, Mindy tells Cliff she’s got feelings for her co-worker — whom he promptly punches. Fledgling love hurts, no?

The subject is still a sore one the next day when she arrives at the hospital in a panic, having heard from that Danny’s got viral meningitis. Mindy’s glad he’s fine but peeved that he refers to her as a “coworker” while re-introducing her to his brother Richie (returning guest star Max Minghella). “We’re not having sex, so technically, we’re not dating,” he explains to her later.

Too bad that Danny, through some spectacularly bad timing, winds up watching a hard copy of the Girl Scout-themed sex romp on his laptop. As he’s reaming Mindy for doing something so foolish, she’s clearly not feeling so well… and Peter is putting together that his two colleagues have a thing for each other.

After Min drops from the same illness that felled Danny, Peter is — perhaps for the first time in his life — is slightly subtle as he explains why she’s so upset about the tape’s online debut. “I think it’s because Mindy really respects the practice. Maybe she’s even a little bit in love with the practice,” he tells Danny. (He gets more graphic, but let’s just leave it there.)

V. GOOD INDEED | In light of Peter’s thoughts, and Richie’s insistence that he’s too judgmental, Danny wheels himself into Mindy’s hospital room and climbs into bed with her. “Let’s do slow,” he agrees, clicking his grandpa reading glasses into place and launching into a (badly accented) recitation of the book that always makes Dr. Lahiri feel better: Bridget Jones’ Diary.

What do you think: Can Mindy Project stay funny if Mindy and Danny date? Log your vote in the poll below, hit the comments to elaborate and then flip through our gallery of great TV kisses (Mindy-Danny included).

If you like TVLine, you'll LOVE our email news alerts! Click here to subscribe.
Mindy Project Recap: Is the Mindy-Danny Romance Marvelous or a Mistake? Weigh in! 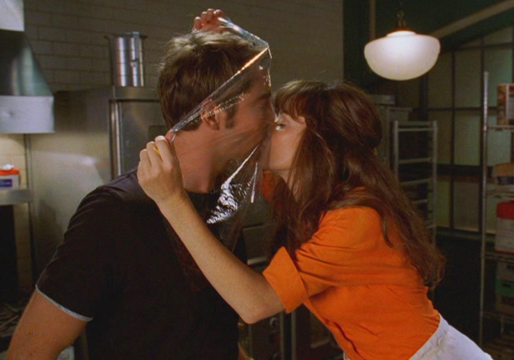