Back in August, ABC announced its ambitious plan to unspool three of its dramas — Grey’s Anatomy, Scandal and Once Upon a Time — with “non-stop” split runs during the 2013-14 TV season. With Shonda Rhimes’ one-two punch returning tonight, and Once following on March 9, TVLine took stock of how this scheduling effort is affecting the ratings, for (hopefully) the better.

The “problem” the split-season plan sought to solve was one of frustrating preemptions throughout the season. Once Upon a Time, for example, was bumped or ran repeats six times during the back half of its sophomore run alone.

RELATED | Camilla Luddington to the Grey’s Anatomy Fandom: Jo Is Not ‘Izzie 2.0′ — and Here’s Why

As Once cocreator Eddy Kitsis previously told TVLine, “Adam [Horowitz] and I, on our behalf, lobbied for” the 11-and-11 scheduling of episodes, “because we felt that last year it hurt momentum when they kept changing the scheduling.” With a nod to his and Horowitz’s previous TV home, he adds, “Lost was the same way. Our show needs to run continuous.”

Although, as the charts below indicate, Once‘s own “non-stop” scheduling hasn’t delivered any significant upside yet (compared to the first 11 episodes of Season 2), creatively the EPs only saw a win, being able to treat the season-opening Neverland arc as “one giant movie.”

RELATED | Once Upon a Time Bombshell: A Big [Spoiler] Is Coming — Ready, Set, Speculate!

One undeniable downside to ABC’s split-season plan is the difficulty experienced in filling the months-long winter hiatus with even remotely comparable fare. (For example, the Scandal-replacing Assets got yanked after two low-rated airings.) One week after pulling the plug on the period spy drama, ABC boss Paul Lee maintained that the extended winter hiatus offers “the chance to try some really interesting pieces of programming … in-season rather than doing it in the summer. So those particular experiments are ones we’re glad we’ve done.”

Here now is a series of charts plotting the ratings for the first half of the Grey’s, Scandal and Once seasons, assessing if the creative momentum translated into a less frustrated, more compelled and steadier viewership. Give the numbers a look and then tell us: Are the split seasons working for you?

If you like TVLine, you'll LOVE our email news alerts! Click here to subscribe.
Grey's Anatomy, Scandal and Once Upon a Time: Is the Split-Season Plan Working Thus Far? 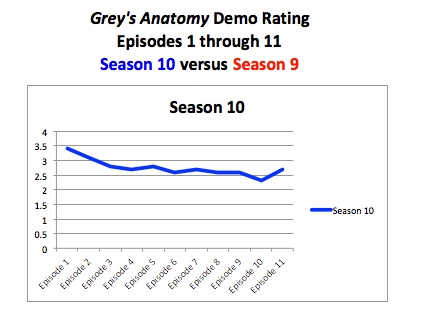