How will Yellowstone react to tragedy? Will La Brea time-travel to the future? Which Disney heroes are dunzo? Read on for answers to those questions plus scoop on many other shows. (You can and should email any brand-new Qs to InsideLine@tvline.com.)

In the Yellowstone premiere, Monica was in a terrible car accident while speeding to the hospital in labor, and her son John died an hour after he was delivered. How will she and Kayce respond to this tragedy? –Ciri
Luke Grimes, who plays Kayce, tells TVLine, “Normally, these big events have seemed to push them apart and send them to their corners. Obviously, in the first season, they  truly separated. But I think that this is the first time you actually see them get closer to deal with the trauma.”

Any Ghosts scoop? –Larry
Richie Moriarty, who plays Pete, told us that his arrow-stricken scout will be “stepping out of his timid self and making some moves” when it comes to his Alberta crush. “The big question is, what will be reciprocated, and where will this relationship go? It feels like our showrunners are kind of playing a long game with this relationship, which I’m very much on board with…. I’ve only read up to Episode 16 of [Season 2], so I don’t know what the other six episodes have in store for this season for Alberta and Pete, but I’m dying to know more and play it all out.” 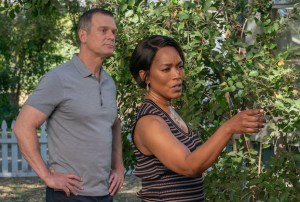 So, obviously 9-1-1‘s Athena and Bobby aren’t going on their cruise. What will they be doing instead? –Lizzie
I am hearing that the midseason finale (airing Nov. 28) will kick off a new mystery that the marrieds will need to work together to solve.

A bunch of new midseason shows are missing from the newly released schedules. ABC’s Criminal Nature, Fox’s Grimsburg, NBC’s L.A. Fire and Rescue and The Wheel … Please advise! –Marie
Criminal Nature died on the vine back in August… the Jon Hamm-led and animated Grimsburg is on track for a “2023” bow… and L.A. Fire and Rescue and The Wheel remain midseason (which these days means “not fall”) premieres.