This Sunday will be twice as nice for fans of CBS’ NCIS: Los Angeles, which is serving up not one but two fresh episodes, beginning at 9:30/8:3oc.

In the second hour, titled “Raising The Dead,” a prison break lets loose a man with designs on killing the President of the United States, so Special Agent Kensi Blye (played by Daniela Ruah) is forced to grill the other, captured escapee, David Kessler, for a possible lead. Thing is, Kessler is a bit of a Kensi Blye “superfan” — and a very twisted one at that — seeing as she was responsible for his prison stint to begin with.

TVLine spoke with Ruah about the intense face-off ahead, acting opposite NCIS: LA writer Frank Military, and her newly announced directorial debut.

TVLINE | What was your reaction when you heard Kensi would be getting her own Silence of the Lambs moment?
You know, I don’t know that I even made that connection at first. First of all, when I read the script, I thought, “They’re going to have to hire a really strong actor to play David Kessler,” because the character’s so beautifully written — and it wasn’t until I walked into hair-and-makeup and saw Frank Military, who is the writer of the episode, walk in as well. I was like, “Oh, hey. What are you doing here so early?” He was like, “I’m playing David Kessler,” and it blew my mind.

I was so happy and excited, because who better to play to play this dark, twisted character than the guy that thought him up? Frank was an actor 20 years ago before he became the incredible writer that he is, so to be able to go back to those chops…. It’s interesting because now that he’s a father, I think age gives us a certain gravitas, a certain weight to certain types of storytelling. So he was just incredible, and I was honored, really. That’s the word — I was honored to work with him in this capacity.

TVLINE | How would you describe Kensi’s strategy when she is first sent in to talk to Kessler?
You talked about Clarice in Silence of the Lambs, but I think there’s a big difference  — and when I explain this, you’ll see why. The difference between them is that Kensi is not green in her experience in dealing with sick minds, right? Clarice was in kind of a discovery mode, and it was almost like a weird “love story” between those two, and that’s not what’s happening here at all. Kensi is an experienced agent. She doesn’t have a young mind that is easily manipulated. Much to the contrary, she’s very aware of this man. She’s the one who put him in jail for 30 years, and it was the case that got her into the Office of Special Projects, it was the case that got Hetty’s attention. So, she knows exactly what she’s doing when she’s going in there, and she knows exactly what kind of language he’s going to use, but that doesn’t mean that she doesn’t crack. When he starts talking about her inability to have children, and how he can tell her “hips haven’t cracked” yet, it’s still sick. It’s still shocking because she obviously is a fundamentally good person fighting for good in everything she does. He definitely manages to create some cracks in her, but that’s so fascinating to me, to watch this journey between them. And then the end is a complete twist.

WATCH AN EXCLUSIVE SNEAK PEEK, THEN READ ON FOR MORE

TVLINE | When I watch a scene like this, I often wonder if there is a moment before you start filming where Frank “pre-apologizes” for all the really awful things he’s about to say?
I don’t know how it would work if it were a movie or anything, but not here. I mean, Frank and I are good friends outside of the show. We are couples that go out to dinner together. The incredible thing about Frank is that he writes the darkest of episodes that we have. I can’t remember what season it was, but the young girls were being buried alive, and the guys that were cut up and stitched back together in different body parts. That’s all Frank. So, that’s a pretty dark place to go when you’re writing an episode, and Frank Military in real life is the complete and absolute opposite of that. He is a ray of sunshine! And he is the most loving, calm, wonderful husband and father. It’s really fascinating to see where he’s able to go in spite of his real personality. He once told me that the darker you go, the more the light shines at the end of it, and that just made so much sense to me. He’s essentially super dark so that he can then brighten up. 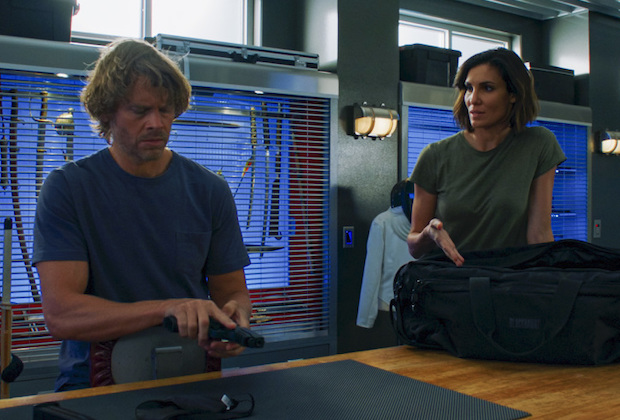 TVLINE | While all this is going on between Kensi and Kessler, she’s also got some drama going on at home with Deeks. They’ve got financial issues and job concerns to deal with….
Exactly. Kensi and Deeks are looking to buy a house, and they’re wanting to have children, and all that obviously requires some sort of financial planning. But now, all of a sudden with all the police reform, Deeks’ LAPD liaison job is in jeopardy. There’s definitely a lot weighing in on their personal lives, which always seems to ebb and flow. Like, last season Kensi got really paranoid and freaked out about the fact that she wasn’t getting pregnant after three months of trying. But anybody who’s had children knows that it probably takes a lot longer than that. And yet this season, we see her sort of as a ray of sunlight, telling Deeks, “It’s going to be OK. We’re going to figure it out. We’re going to have a baby, and we’re going to get a house.” It’s interesting how he was driving the positivity last season, and so far this season Kensi’s the one who’s turned the page and is like, “This is going to happen for us.”

TVLINE | Speaking of Kensi and Deeks, I was curious: With COVID and everything, is your husband [costar Eric Christian Olsen’s brother, David Paul Olsen] “on standby” to race to the set and do an intimate scene if needed?
[Laughs] You know, just like the rest of the season has been adapted to accommodate the pandemic — you’ll notice that you don’t have the whole cast in the OPS Center like you used to, and there are a lot of phone calls — Eric and I are very conservative quarantiners, especially because he has a newborn at home.

TVLINE | That’s right. Yeah.
And all four of our kids are homeschooled right now, so there isn’t any external influence. Really, Eric and I are the only ones really going out of the house for work, but we’re in masks all day, the crew is in a mask all the time…. When they come in to adjust certain lighting, we leave the set, and then they sanitize everything, and then we come back in….  The fact that we’ve made it thus far, to Episode 9, unscathed is a miracle, and we’re very grateful and thankful and everybody’s pushing for it to stay this way because we all want this season to go to the end. 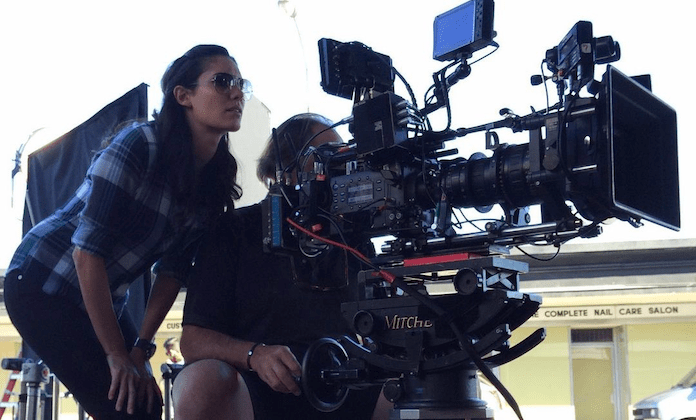 Ruah on set in 2014 (Instagram.com/danielaruah)

TVLINE | Tell me everything you know about the episode you’re directing, to air in February.
Yeah, it’ll be my first experience directing television. It is not a big jump, I don’t think — I mean, living in a show like this for 12 years is essentially like attending film school, right? If you open your eyes, and you open your ears, and you pay attention, you’re going to learn most of what you need to know on a theoretical basis.But then it’s a question of putting it into practice, and I am surrounded by people I trust blindly to help me, to collaborate with me on everything. I know how hard it is to get a job like this to begin with, and I’m very fortunate to have my first experience be with my family because that’s what it is.

Also, just in the last few years, [showrunner] Scott Gemmill and our other producers have been, I think, more creative with how the show is put together. We are a network procedural and you have to have those boundaries that we fall into, but I feel like they’ve made those parameters a little wider than they used to be, and I find that directors are coming in and being able to be a bit more original with what they are able to shoot, and how they are able to shoot. So, I look forward to being creative and collaborating with my family.