Yellowstone didn’t just come back Sunday, it came back with the proverbial vengeance. Over the course of Season 5’s back-to-back premiere episodes, John was, however reluctantly, sworn in as the new governor of Montana (more about its impact here), the beleaguered Dutton family was dealt a devastating blow (more on its aftermath here), and although Beth didn’t know it yet, she was about to meet her match — as scary a thought as that is! 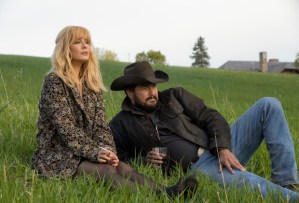 In other developments, Jamie was put in the uncomfortable, almost unthinkable, position of wondering whether prison time would have been preferable to living under his sister’s thumb, Rainwater regretted calling in a big gun that seemed to be pointed directly at him (more on his predicament here), and Rip realized that when giving orders, he has to be, like, really super mega specific. At least when he’s giving them to Ryan and Colby.

If you read on, we’ll go into (far) greater detail about what went down after the months-long on-screen time jump that separated Season 4 from Season 5 — from the ranch hand who might have just roped himself a sweetheart to the latest way that poor Carter found to f–k up. Then you can hit the comments with your questions, quibbles, critiques — the works.