Season 5 of Paramount Network’s Yellowstone will begin anything but typically for embattled marrieds Kayce and Monica, portrayers Luke Grimes and Kelsey Asbille tell TVLine. For once, Tate’s folks aren’t at odds or dealing with kidnappers or ranch invaders.

Nope, when the first two of the 14 (!) episodes debut on Sunday, Nov. 13, at 8/7c, “it starts off happy, which is strange,” Asbille admits. “But you see a really different Kayce and Monica by the end of the season, with a whole new sense of purpose.”

Adds Grimes: “Something that happens early on once again puts us in a really difficult position, but you see them come together in a way that they haven’t before.” 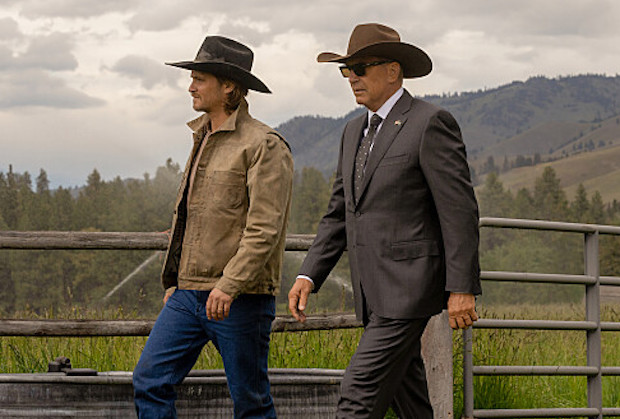 Ah, but will the couple, who in Season 4’s finale were expecting baby No. 2, not only come together but be able to stay together? That’s a big question mark, considering Kayce’s vision of “the end of us.” Did that relate to the star-crossed lovers… or perhaps to Kayce’s father and the Duttons? “There are so many ways that you can interpret that,” Grimes acknowledges. “I asked Taylor [Sheridan, the series’ co-creator] about it, but he didn’t want to give too much away. He kind of gave me enough to be able to say the line, but he didn’t want to tell me, either.

“So I kind of came up with my own idea, just for the purposes of playing that line,” he continues. And that idea was… ? “I don’t think I can tell you that, to be honest!” he laughs as Asbille chimes in, “You’ve got to keep the mystery!”

What do you think the line meant? And do you believe that Kayce and Monica are endgame? Hit the comments with your theories and predictions.