Shaun and Lea’s honeymoon will have to wait when The Good Doctor returns for Season 6.

TVLine has your exclusive first look at the Monday, Oct. 3 premiere (ABC, 10/9c), which picks up in the immediate aftermath of a double stabbing. As fans will recall, the Season 5 finale took a shocking turn when Nurse Villanueva’s violent ex-boyfriend Owen snuck into St. Bonaventure, posing as a flower delivery man. Chief of surgery Dr. Audrey Lim (played since Season 1 by Christina Chang) found Villanueva, who’d been stabbed and left for dead, before she, too, was impaled. 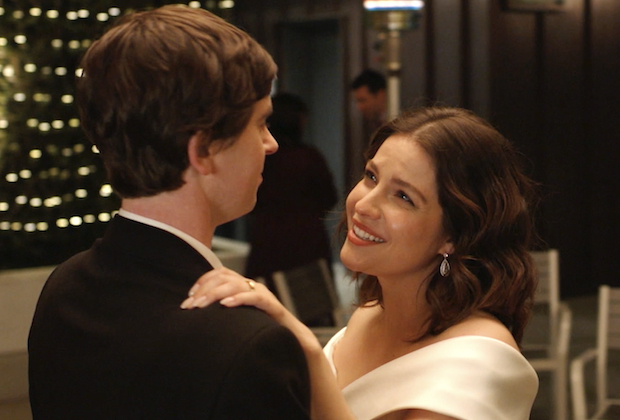 The promo, which is streaming above, starts off at Shaun and Lea’s wedding reception. The fan-favorite couple is sharing one of their first dances as husband and wife, and they’ve never looked happier. But the mood changes as soon as the newlyweds catch wind of what’s happening downstairs — and Dr. Murphy, always the hero, is determined to save the day.

“The first episode has a huge amount of intensity and fun, but it’s difficult because it’s the immediate fallout [from the finale],” executive producer David Shore previously told TVLine. “Lim’s journey is going to be a big part of it.”

As previously reported, the 22-episode Season 6 will feature the addition of two new residents: Brandon Larracuente (of Freeform’s Party of Five reboot) as Danny, a charming intern with an “interest in somewhat controversial alternative medicine,” and Savannah Welch (Titans‘ Barbara Gordon) as Danni, an Annapolis grad who completed med school in the Navy.

Keep scrolling as we break down all the big moments (and potential revelations) from The Good Doctor‘s Season 6 teaser trailer, then hit the comments with your reactions.