The Bear got rave reviews for its freshman run — so what are the writers of Hulu’s intense kitchen dramedy cooking up for its next course?

“It almost feels like Season 1 was sort of, ‘Let’s catch up,’ and Season 2 is sort of like where the show properly begins, once we’ve met everyone and seen their backstory,” co-showrunner and executive producer Christopher Storer told reporters at the Television Critics Association winter press tour on Thursday. “So it’s been cool to just expand the world and just learn more about them.” 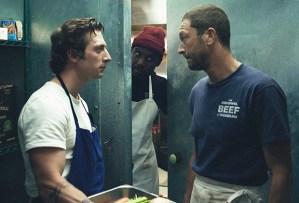 The freshman season ended with chef Carmy finding a secret stash of cash hidden by his late brother and deciding to relaunch the sandwich shop as a fine-dining restaurant. So what does that mean for Richie and the rest of the original staff? “Season 2, really, it’s about balance in a lot of ways, between time and what it means to start fresh and how you can start in a healthy direction,” Storer added. “For somebody like Richie, I think finding where he fits in is what he’s looking for in Season 2.”

The finale felt like a big victory for Carmy and company, but it’s not exactly smooth sailing for them in Season 2, Storer warns: “They think they’re starting from a healthy place, but a restaurant, like a lot of other businesses, just creates the same amount of problems and the same amount of headaches every day. So we see them have to step up in certain ways, in some ways regressing, but hopefully coming back together to open this thing by a very specific date.” 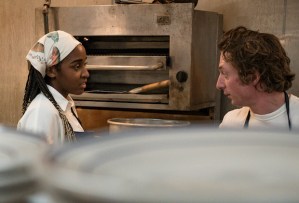 He also offered this ominous prediction: “Winning is losing. The minute you feel like you’ve won something, there’s immediately the next challenge… They are trying to execute a finer level of dining, but it doesn’t mean it’s easy. It doesn’t mean that everyone thinks it’s the right thing to do. So obviously there is inner turmoil, and there have been some challenges there.”

Season 1 was a lot closer to a drama than a comedy, with its nail-biting kitchen scenes, but “going into Season 2, we found ourselves leaning a little more into the lighter side, just from the writing perspective,” co-showrunner and executive producer Joanna Calo hinted. She cautioned, though: “We haven’t made it [yet], so maybe that’ll all just be undone.” (Season 2 is still in the writing stage and hasn’t yet begun production.)

The Bear debuted on Hulu in June, with all eight Season 1 episodes dropping at once. It enjoyed rapturous acclaim (we here at TVLine named it the best TV show of 2022), and star Jeremy Allen White won the Golden Globe earlier this week for best actor in a comedy. It was renewed for Season 2 in July, which will consist of 10 episodes (up from 8 last season) and will air in “early summer,” FX says.

What are you hoping to see in Season 2? Place your order in the comments.