The death of a beloved teacher brought old classmates together during Wednesday’s episode of The Conners. Among them was William H. Macy’s Smitty Cusamano, who introduced himself to Darlene and Becky as the man who could have been their father.

Confused? Allow us to explain….

After he left Lanford, Smitty went on to build a considerable fortune in the pool supply business. But back in the day, he was just like Dan — another blue collar kid with a crush on Roseanne. He even took Roseanne to homecoming, only to be humiliated when she went home with Dan.

Fifty years later, Smitty is still bitter. He cuts Dan a check for $6,000 to help with the mortgage, then tells everyone at The Lobo that Dan hit him up for money. An incensed Dan insists on a fight, but Smitty refuses to engage in fisticuffs. Instead, he offers $2,000 to anyone willing to fight Dan on his behalf. That’s when Bobo, last seen when Dan knocked his lights out in Roseanne Season 1, steps up and offers to deck Dan for free. Luckily for Dan, former cop Jackie is there to remind Bobo of his extensive rap sheet. That, alone, convinces the ‘roided-out bully to back down.

Later on, Dan confides in Louise that he’s jealous of Smitty. Smitty didn’t get the girl, but he did go on to build a business empire. Dan, on the other hand, is still struggling to make ends meet. (And lest we forget, he never won the Illinois State Lottery….) 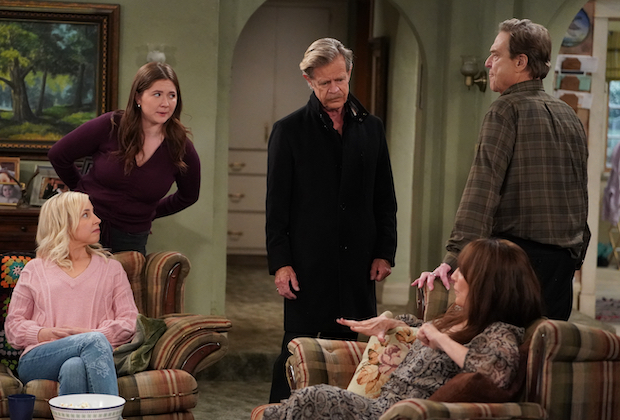 The following day, at their teacher’s funeral, Dan is given a letter he wrote to his future self in high school. Turns out, it’s just the pick-me-up he needs. After reading it, he realizes that he did succeed at life. No, he wasn’t financially secure, but he could rest easy knowing that he turned out to be a better father than his dad.

We should also note that Dan does, in fact, cash Smitty’s check to pay the mortgage. Smitty confronts him about it, but he’s not mad. He shows up at the Conner residence to apologize to Dan for his earlier behavior — and to give Emma Kenney a chance to appear opposite her former Shameless dad.

What did you think of Macy’s guest spot on The Conners? What about the return of Bobo? Hit the comments with your reactions.