It all comes down to this.

In Wednesday’s season finale of Survivor, the game’s top two frontrunners were left in the dust, as Gabler, Cassidy and Owen secured their seats at the final Tribal Council of the year. (Disappointed Karla or Jesse didn’t make it there? I’m gonna go out on a limb and say you’re not alone.)

But before the jury could take a crack at the finalists, one last advantage sought to shake up the game, giving one castaway the chance to get a leg up on the competition at the Final 5 immunity challenge. Plus, another trip to the Survivor sanctuary! So who got the grub, and more importantly, who became the series’ newest Sole Survivor? Let’s break it all down.

ADVANTAGE CLUE | It wouldn’t be a Survivor finale without one last advantage, only this time, the players must again unscramble a series of words before they can start their hunt. Cass is hoping to beat Karla to the punch because she’s still jonesing to get her former No. 1 out of this game. But Karla is the first to take off and she’s able to secure the package, with Owen just inches away from her! Considering her injuries, that’s pretty major.

IMMUNITY IS BACK UP FOR GRABS | Karla’s big win gives her a slight advantage in the challenge where they must maneuver a buoy through obstacles, carry blocks to a word puzzle and solve the secret phrase (which hopefully has nothing to do with broccoli). They’re also playing for rewards: Steak, potatoes, veggies, wine and cheesecake. 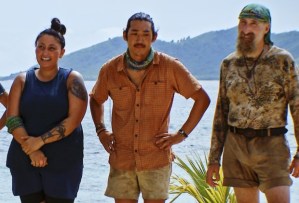 Karla gets to start with 10 of her letter blocks already at her finish table, saving her a few trips through the challenge. She does get all of her letters over first, but Owen beats her to the punch and takes the steak. He picks Cassidy to dine with, and she convinces him that Karla is the next big target to gun for.

Meanwhile back at camp, Karla is stirring it all up, telling Cassidy how dangerous Jesse is (who then shares that with Jesse), while trying to get Jesse to vote Cass. Jesse still holds on to the season’s final immunity idol, but what he does with it will likely crush someone else’s dream.

TRIBAL NO. 1 | Karla, again, tries to play up Jesse’s big resume, only he whips out Jeanine’s idol, who is sitting on the jury with the most shocked face we’ve seen since Eliza Orlins. Karla asks Jesse if he’d entertain a bigger move than her, and the two agree to step aside and “dance” in the corner. Or something. I think it was code for “scheme like your life depends on it.” They want to try to get Gabler to vote for Cass. Soon enough, everyone is standing and whispering, so this Tribal is absolutely live.

When Jeff reads the votes, Jesse plays the idol… for himself. (He’s no dummy.) The votes come in and “Khaos Karla” becomes the next member of the jury. (Read our Q&A with Karla here.)

FINAL IMMUNITY | It’s the stacking bowls on a spring-loaded contraption challenge, and the winner of this, of course, gets a fast-pass straight to the Final 3. These challenge repeats have got me down, you guys. How many times have we seen this one (and the one-handed, place-the-balls-in-a-metal contraption one)? TOO MANY TIMES. 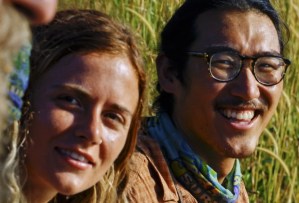 It’s a showdown between Cass and Owen, but when Owen’s stack topples, it’s clear Cassidy has this one in the bag. Now she has to make a big, million-dollar decision. She needs someone to take out Jesse. No ifs, ands or buts about it. But is Owen or Gabler the right man for the job?

Gabler and Owen are both looking to make one big splashy move, so they’re both happy to go in and make fire. But you know what? They should’ve considered this DAYS AGO. Instead, Gabler was so focused on playing stealthy that he… didn’t do anything? Gabler then says something that made my jaw slam to the ground. He plans on donating the entire prize to charity, if he wins. Well, that’d certainly be a Survivor first.

Jesse, meanwhile, tries to convince Cassidy to go against him in the fire task, and quite honestly, it’s his dumbest, most desperate Hail Mary yet. It ain’t happening, bruh.

FIRE | Cass makes her choice and sends Gabler and Jesse into battle. (I’ve been covering Survivor for TVLine for a few years now. Have I ever talked about how much I LOATHE the fire-making challenge? Oh, I have? Are you sick of hearing me gripe about it? Alright, alright. Moving on!)

In one of the most difficult Survivor scenes to watch of late, Gabler takes family man Jesse down. The poor guy is in tears as he talks about his kids, his lack of safety net at home and how one wrong move led to it all crashing down on him. Anyone else feelings gutted for him? With that, the coulda-been, shoulda-been winner of Season 43 gets his torch snuffed and exits the game. Bummer. (Read our interview with Jesse here.) 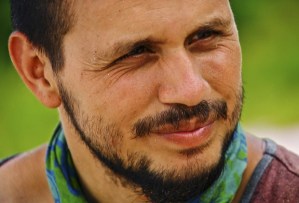 FINAL TRIBAL | It’s not that these three remaining players don’t deserve to win or that they didn’t play decent games, it’s just that they’re not Jesse or Karla. But I’m going to have to get over that really fast because after a bountiful breakfast, Cassidy, Gabler and Owen face the jury and plead their case.

Gabler plays up his relationship-building and how he had multiple ways to get to the end at every stage of the game. Cass says she was never on the wrong side of the vote, while Owen, a self-proclaimed underdog and “student of the game,” says that he clawed and scratched himself out of holes that neither of the other two had to do.

The jury seems highly entertained by Gabler’s explanations, and they’re also impressed by the Final 3’s physical prowess. They question why Cass sent Gabler into fire, what everyone’s biggest mistakes were and how persuasion played a part in their games.

But it all comes down to the final vote, and the tribe has spoken: Gabler wins the game with seven votes. (Read our Q&A with Gabler here.)

What do you think of this Final 3, and did the right person win the cash? Drop some comments below!