Karla Cruz Godoy might not have won Survivor 43, but man, did she go out swinging.

After losing the Final 5 immunity challenge to Owen, Karla pulled out every trick in the book to try to place the target on someone else’s back. She pitched Jesse as the game’s biggest threat, tried to flip the script on Cass, then later at Tribal, attempted to strike a new plan with the man she had been throwing under the bus. You can’t blame her for trying, but ultimately the tribe had had enough and sent her packing in fifth place. (Read our full recap here.)

Below, Karla talks to TVLine about conquering her self doubt, why she voted for Gabler over Cassidy, and what she took away from watching Xena: Warrior Princess.

TVLINE | Cassidy said at Final Tribal that she regrets how your last conversation went down. Do you regret it as well, and what was your first chat like once the game was officially over?
KARLA CRUZ GODOY | Final Tribal Council is an emotional time. For the Final 3, you’re still in the game and people forget that. I was able to take a shower, sleep on a bed, eat, think and get the nutrition I needed. I mean, I felt it. I appreciated it. Do I regret the vote that I made? I do not. Cass and I have talked about everything that had happened since the game and there’s just this understanding that it’s really based off the moves that we made, where the jury voted and how we thought the game went. 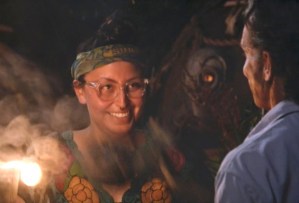 TVLINE | Why did you vote for Gabler over Cass?
We built a society where if you played bold games you were essentially targeted. We wanted to see, out of these three players, who made a move. There were many times where all three players had immunity necklaces around their necks. They were all safe at some point. What did they do throughout their game that was a splash or what risk did they take that would’ve awarded them a million dollars? For us, it narrowed it down to: Name a move. Name a move that you have led. We saw Gabler do that with the Elie vote, we saw him take that risk in that fire-making challenge, and it was like, who really wanted the million dollars? Prove it!

TVLINE | When you pulled Jesse aside at that Final 5 Tribal, did you think you had a chance of changing his mind and getting Cass out?
For a second I did! The thing that turned me away form that was he said, “I not only need you, but I need you to convince someone else.” For me, red flags went up. Why do you need me and someone else to switch when we have the numbers right here? If you want to make a move, let’s make it! We know where everyone’s voting, they’re voting for me.

But I think I low-key fumbled the bag a bit, because when I heard that from him, I panicked and was like, “Wait, why is he telling me that?” and for a second, honestly, I thought his idol was fake. So I started telling everyone it was fake. I think I told Owen and Gabler, and I remember going up to Cass like, “His idol’s fake, let’s do something!” And they didn’t want to make a move and went straight to Jesse and said, “She’s throwing your name under the bus. She’s saying the idol is fake,” and I was like, “We are here! Make a move!” So we all sat down and I was like, “Alright, Jeff. They don’t want to flip.” But that’s why I wrote Jesse’s name down. Besides it being a joke to me, I was like, “I’m going to ruin your perfect game,” but wouldn’t that have been amazing? That would’ve been the biggest move of the season. Like BAM! And you go home. That’s what I was hoping would happen.

TVLINE | Do you think you could’ve beaten Jesse had you gone to the end with him?
That’s the tough part. I feel like I definitely wanted to go to the end with a fight. I think a lot of us get selfish and we want to have an easy way, but I always told Cody and Jesse, “I’ll go to the end with the two of you. Why not? Let’s duke it out.” That would’ve been really hard. I would’ve had to use my negotiation skills. For me, in my head, I was like, “I had to work my ass off for these beads. He got lucky with these beads. They just landed in his lap? What kind of game is that?” I think that was my whole thing. Then, I think I would’ve just taken a lot of credit for moves he made because we made a lot of moves together. Cody, Jesse and I started working together when we first merged, especially around the Dwight/Noelle votes, so I think I definitely would’ve played that card. 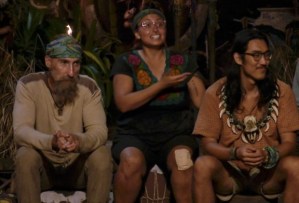 TVLINE | At what stage of the game did it hit you, like: Whoa, I could win this thing.
I think for me the biggest thing was around the immunity challenges. So I injured myself with my hand at the merge. I was like, “Wait, people probably think I’m not that strong if I’m injured.” But I was still strong. I could do it. When I won that first immunity challenge I was like, “This is it.” Around my social standing, when it came to playing with Jesse, Cody and Sami, I was like, “Wait, I think I’m stronger than I think I am.” I doubted myself in the early game and it was really up to me to determine whether I have it. In the latter half of the game, I was like, “If I can do this correctly and get to the end, I think I got this.”

TVLINE | I really liked what you guys said about self doubt during the After Show. That’s such a universal, humanistic theme. We’ve all experienced that. Was there one specific moment where you felt that start to melt away?
Yes! Returning from the Cody blindside, I think that was my lowest point in the game. I’m fully injured, my body gave up on me, I flushed my idol and clearly, I’m at the bottom. We go to a new island, I’m crying my eyes out. I was like, “OK, this is a sign. My body is telling me I’m done.” But I’m a freaking warrior. I learned from Xena: Warrior Princess! You don’t freaking give up! For me, it was that moment of my lowest of lows. I have been through so much in life, and I was like, “Karla. This is nothing. It’s a game. You’ll be home in a week. Pull through and fight.” That’s what it was for me.

TVLINE | Do you have any regrets from your time out there? Any move you wish you did or didn’t make?
No regrets. I have an Édith Piaf tattoo on my arm. It’s “I regret nothing.” I wouldn’t call it a regret, but there was a moment in the game when I first started bonding with Jesse — we have a lot of similarities when it comes to our lives — and I remember thinking, “I feel way too comfortable with this kid.” I remember saying, “What’s unfortunate is I think I’m going to have to take him out at some point.” I should’ve leaned into that a little bit. But not really though, because I wouldn’t have been where I was in the game without him. I think I would’ve played a little more aggressively. It’s hard when you are in the majority and you’re leading votes to say, “Let me play a more aggressive game,” because I was making stuff happen with the people I was with. So that’s where you kind of get more of the safe game play because the people with the three idols were the people calling the shots.

TVLINE | I have to ask you about the Last Gasp challenge. Did you have any moments of panic being in that water for that long? How did you manage to pull that off?
I feel like everyone is not going to believe me when I say this: To me that was the easiest challenge ever, only because I found a rhythm in the water. You learn to breathe with the water. Once I kind of like, discovered her, I was like, “This is it.” I learned when the swells were coming up and down and I just learned to breathe. But there was a moment I was trying to talk to Jeff and I remember the message, I was like, “You know, Jeff. There are so many people who die by drowning trying to cross the border to the U.S.,” because my parents are immigrants from Mexico. I was talking too much and the water came in and I was choking on it. I was like, “OK, I’m done talking!” I was about to get out of the game just trying to make a message. There was one moment at the height of the swell where I almost gave up, but I stuck through it.

TVLINE | I definitely think your phone’s going to be ringing. If you get a call asking you to come out for Round 2, are you into that?
Heck yeah! It’s the best thing ever. For me, it’s life changing. You don’t know how much you can push yourself until you’re out there. So why not? Let’s do it again!