At the top of Wednesday’s season finale of Survivor, Jesse Lopez looked golden. He still had an immunity idol to carry him to the Final 4. From there, he was just one immunity or fire-making challenge away from securing that $1 million bag.

But it didn’t happen.

After losing immunity to Cass and getting demolished by Gabler in fire, Jesse’s dream of providing for his family and becoming a champion came to a crushing close. (Read a full recap here.)

Below, Jesse talks to TVLine about the epic Cody blindside, that brutal fire-making defeat and whether he sees himself as a villain.

TVLINE | Well, you didn’t “get that money baby,” but you did win the respect and hearts of Survivor fans everywhere. Is that at least a teeny, tiny bit of a consolation prize?
JESSE LOPEZ | It definitely helps! The last week has been wild in terms of people sending me messages and love and support, so that’s been incredible. If I can’t win the million, that’s the next best thing. 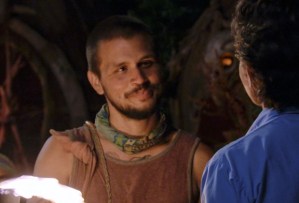 TVLINE | It was an emotional night when your torch was snuffed and you walked down that dark pathway at Tribal. Tell me a bit about what you were feeling in that moment.
As you saw at Tribal Council, all of the emotions hit right after the fire-making challenge. It was a lot. It was really heavy. There were feelings of disappointment, worry that I had let my kids down, but I did not want to leave the game on that sort of note. I went out there to set an example for my kids and people in general who come from my background, so I wanted to end on a positive note. So I turned it around, reflected on the experience… I loved it. Walking out, the tears were dry.

TVLINE | Time for a round of Survivor What If. Let’s say you don’t blindside Cody. How do you think your game would’ve fared from there? Are you sure you would’ve lost against Cody in a final?
A lot of people play to hopefully make it to the Final 3. The game that I was playing was, if I by some chance, some miracle win fire or win immunity at four, I wanted there to be no questions asked. I was going big and I was doing everything I could so that if I made it to the Final 3, there was no question that I played the best game there. Taking out Cody was part of that. He had talked about taking me to the end. “We started this game together, we’re finishing this game together.” But for me and my game plan, that was never an option, honestly.

TVLINE | That Cody blindside was huge. One of the best moves in the history of this game. Once you got to Ponderosa, what was your first conversation with Cody like?
It was kind of like the handshake that I tried… [Laughs] There was a slight pause, but immediately a hug! I think Cody, he was hurt… these are real relationships. That was hard for me to do and hard for him to experience. But once I saw him at Ponderosa, the first thing he told me was that he understood. Especially after seeing Jeanine’s idol, I think that’s where it clicked for him. He’s told me since then, “I’m so glad you took me as far as you did.” [Laughs] I think as soon as I pulled out Jeanine’s idol, it made sense. 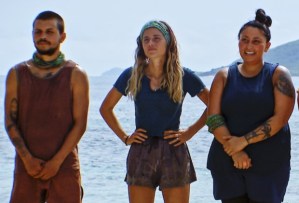 TVLINE | I’ve written a bit about how this new era doesn’t seem to produce classic villains like back in the day. That said, do you consider yourself a villain?
Ooh, that is so tough! You know what? [Laughs] People want me to say I’m a villain! But I spent the last few days at Disneyland in California Adventure and I got to take a picture with Loki, so I’m not a villain, I’m a trickster! That’s about it.

TVLINE | I love that! Great answer. Now, how confident were you going into the fire-making challenge against Gabler?
You know what’s funny? The whole game I’m trying to pick up information, right? Any interaction people give, I’m taking it in and processing it. At one point I asked Owen, like “Hey, how’s Gabler at fire making?” This wasn’t at Final 5, it was before then, and Owen was like, “He’s not great at starting fires.” He was not complimentary of Gabler’s fire-making skills is what I will say. [Laughs] Gabler breaking the freaking record on fire making… I was not expecting that! [Laughs] But I will say, I would’ve preferred to go up against anybody but Gabler in that Final 4, but he just blew it out of the water. It was insane.

TVLINE | At the Final 5 Tribal, Karla pulled you aside and you seemed open to other options. Were you ever considering keeping her, and had you done that, do you think that would’ve changed your fate?
The whole day leading to that Tribal, I was considering what to do with the idol. Nobody knew I had it. Also, surprisingly, I did not feel the heat. I didn’t feel like it was for sure me. I was like, “I don’t necessarily need to play this idol on myself. I could do something wilder and play it on Karla.” But I also knew that Karla is an amazing player. When she’s on the defensive, she’s great. And she ended up voting for me! How crazy would that have been if I played the idol for Karla and that one vote from her sends me home?!

What didn’t get shown was we were talking about it live and she ended up telling Gabler and Cass at one point, “I think Jesse’s idol is fake,” and she wanted to vote for me. And so Cass and Gabler immediately told me and I was like, “Well, that’s it. I’m not considering any options from Karla at this point.” [Laughs] I wanted to play with her, but it was too risky and I think I made the right move.

TVLINE | Is there anything you’d pinpoint as your biggest mistake in the game?
I don’t have any regrets. I wanted to go in that game and play it in a way where if I magically made it to the end, there would be no questions asked. I did just that. I guess my biggest mistake is not taking out Gabler! [Laughs] He just blew me out of the water. He clotheslined me! 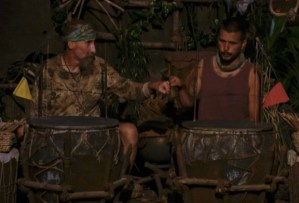 TVLINE | Why Gabler in the final vote over Cassidy?
For me, there was a lot to that. In the game you’re solely thinking about your game and getting to the end, and I had 24 hours to process Owen’s game, Cass’s game, Gabler’s game. But I will say, during Tribal, I asked a question, “Tell me a time where you persuaded people to vote the way you wanted.” Gabler gave the Elie vote. He spearheaded that. No questions asked. He was like, “I’m doing Elie… and we’re all doing Elie!” I think Cass’s answer was Ryan and I think they clipped it at a certain point [during] me and Cody’s conversation, but our strategy ended at, “If James goes home, then Ryan goes home.” So if anybody else at that split five Tribal Council on the other side went home, it was going to be Cass.

So for me, I respected people who had agency in the game, people who left it all out there. Gabler had agency at multiple points in the game. There was also a point in Cody’s vote-out where Cass knew about me having Cody’s idol, Owen knew about me having Cody’s idol, Gabler did not. I went up to Gabler and told him, “Look, I know we have this ride-or-die alliance, but if Cody gets to the end, he’s probably going to sweep me and you.” That’s all Gabler needed to hear. He was like, “I don’t care if Cody plays the idol, I’m going for it. I came here to win. I didn’t come here to get second or third.” I think it was a combination of Gabler having that agency at Elie’s vote, as well as him showing me that he was willing to leave it all out there. He was willing to go out by Cody playing his idol. There was just a lot of heart that he showed me in that moment.

TVLINE | Besides being away from your family, what was the hardest aspect of this game for you?
It’s like you answered the question and removed the first thing that I would’ve said! [Laughs] I love it. You’re asking the hard questions here because I would’ve said being away from my family. A lot of people are like, “Oh, it’s the lack of sleep and food,” but for me, that’s playing Survivor! When I got rewards, I ended up feeling more tired from the food, so it’s like… I don’t know. I guess if I had to pick the hardest aspect of it, I think just the fact that it’s real relationships. It’s not just TV or a video game where you’re moving around. All of the moves I made I would have to sit back down and process it. With Cody, immediately after I sat back down after playing his idol, I looked at him and he’s heartbroken. So I think the hardest part is the fact that these are real people, these are real relationships. You’re trying to get to the end, but you’re ending people’s dreams. It’s a tough thing to do.

TVLINE | Listen, your phone’s going to ring again. They’re gonna come calling. Would you do it all over again?
Only if they put me on the Heroes tribe. [Laughs]